It's 'that old question' time again 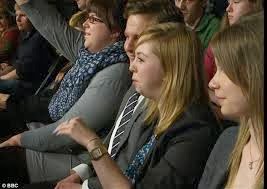 Quite a few posts at Is the BBC biased? have found themselves splashing around (like the boss of the Environment Agency in a Somerset field) over the vexed question of why BBC One Question Time audiences so often seem to be heavily loaded towards the Left, almost to the point of seeming to be artificially stuffed with left-wing activists - even though right-wing BBC critics like James Delingpole and Nigel Farage accept that the BBC are being honest when they say they rigorously attempt to ensure a fair balance of opinions in their audiences.

Now another right-wing BBC critic, Janet Daley, has entered the field and given her explanation for this strange phenomenon. And she too believes the BBC is trying to be fair.

She comes to conclusions quite similar to my own earlier efforts - and to those of James Delingpole and Nigel Farage; however, she adds an extra insight to theirs, based on her own personal experience of being a youthful left-wing activist:

It is almost impossible for those who lead normal lives with private preoccupations to win out over professional activists who are trained in the techniques of public influence. An example of this is the way in which groups of activists conduct themselves at public meetings. We were always instructed not to sit together but to scatter ourselves through the audience, so that when we made noise (which we were encouraged to do) it would seem as if the whole hall was joining in.