The Babylonian Noah, experts, science, Vermeer and a play about blindness and the cosmos 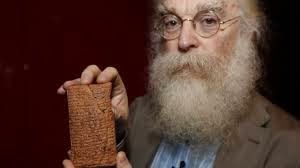 Talking of flooding (as we were), it's bouquet time again...as I warmly recommend this morning's Start the Week.

It re-interviewed Dr Irving Finkel of the British Museum (fresh from his appearance on Ed Stourton's Sunday) about that remarkable Babylonian tablet from c1750 BC, which startlingly prefigured the Bible story of Noah's Ark and the Flood  by about a thousand years. Dr Finkel is a very interesting and enthusiastic expert, and it was fascinating stuff.

I was also taken by sociology professor Harry Collins of Cardiff University. He was on to defend people like Dr Finkel - experts.

Harry isn't a jargon-spouting sociologist, thank goodness; indeed, he was so genial and conversational that he could easily be a blogger - were he not quite so wary of internet opinion-spouters (like me).

I'm not unsympathetic to his defence of experts either.

I'm far too discreet to go into personal family matters, but I know that the word 'expert' can be a dirty word for some people (very close to home) - which is absurd and slightly alarming.

Simply put, people who spend years of their life thinking, researching and discovering new things surely know more about those things than we do - whether we like to think so or not.

Plus, science really is difficult and, yes, most non-scientists (like me) who blab about complicated scientific matters really do have much less of a clue (however confident they may sound) than bone fide scientists.

Ah, but, I hear you say...climate science.

Prof Collins mentioned that. He also mentioned fraud in science, and human nature.

He didn't connect either of those to the climate science controversy which rages across the internet (and beyond) though. Quite the opposite. For him those internet users who rage against the climate science 'consensus' are precisely the wrong-headed people he has in mind. You may disagree.

I'm quite 'wrong-headed' about climate science myself, but I think Harry's general point stands nonetheless.

Incidentally, presenter Tom Sutcliffe (who I continue to think of as either 'Tom Sutcliffe of The Guardian', or 'Tom Service') had a dig at Eric Pickles for sneering at experts along the way. Is that a case of BBC bias or Guardian bias? (Or are they one and the same thing?) 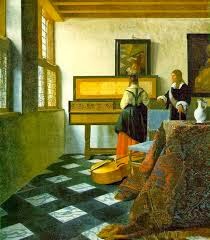 Also present was Professor Colin Blakemore talking about our senses, the link between the arts and science, and a documentary film called Tim's Vermeer (a Penn & Teller production in which Prof Blakemore has been involved), where an inventor, Tim Jenison, duplicates the apparent techniques of Vermeer, using small mirrors - which is another take on David Hockney's idea that the precision of some of the great painters came from their use of things like camera obscura. (I've always found that plausible).

The final guest - from the arts world - was Hattie Naylor, a playwright. She embodies Prof Blakesmore vision of an arts-science fusion. Her latest play Sound&Fury’s Going Dark is being shown at the Science Museum, tackling blindness and cosmology. If I lived three hundred or more miles closer to London, and if I was sort of person who goes to see plays, I might, just might, have gone to see this. Though probably not.
Posted by Craig at 22:37