Floods, Latin, Christians on the Left, mental illness in Pakistan, the north-south divide, euthanasia for children and marriage for gay vicars 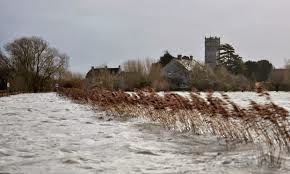 It's that time of the week again. Doesn't it come round quickly?

This morning's Sunday on Radio 4 began with the flooding in Somerset, as the BBC's delightfully-named reporter Sarah Swadling (oh please let her do a Nativity story in December!) went to speak to Rev Jane Twitty.

Jane Twitty is in charge of several parishes in the area, including cut-off Muchelney, and described what the Church is doing there. The Church is doing a lot, providing prayer, practical support and a place of sanctuary, and - by the sounds of it - acting as Churches have always done, serving as the focal point of the community in times of trouble. Even in this secular age, people are making use of it. It all sounds very reassuring to me.

Then came a piece about the Pope, Twitter and Latin. (At the mention of Twitter, Sue will doubtless have rushed to her 'Off' switch!)

Pope Francis (unlike his predecessor) gets a good press from Sunday, so this was a very good-natured interview between William Crawley and enthusiastic Latin teacher Paul Thompson (sp?). Its starting point was Pope Francis's famous tweet in Latin. Why was it so successful?

Well, Paul says that you can be very succinct in Latin. Due to its word order, you can say a lot in very few words - which obviously suits Twitter with its 140 characters. He said that young people like learning Latin, enjoying the challenge of connecting with an ancient language. William suggested it also opens doors for other languages, and Paul agreed. William then asked him if there's a Latin word for 'Twitter'. Based on a poem by Catullus (see below), Paul suggested variants on 'pipiabat' (a bird's chirp), such as 'Pipiatio'.

I knew, I just knew, that Archbishop Vincent Nichols's "stinging critique" of the coalition government's welfare polices would be discussed by this morning Sunday - and so it proved, though it appeared somewhat circuitously.

The route it came by was a plug for a 'summit' of Christians on the Left being held this coming week at a food bank, to discuss today's political issues in the light of what William Crawley called that "radical manifesto", the Sermon on the Mount. Plugs are always helpful for those being plugged.

So what does Christian social teaching have to say about welfare reform and income inequality?

William talked to Andy Flannigan of the Labour-aligned Christians on the Left and Colin Bloom of the Conservative Christian Fellowship. That was balanced enough, and the discussion was also a pleasingly serious but good-natured affair between people with very different opinions who respected the other's point of view. William, inevitably, brought up Archishop Vincent's attack. Andy Flannagan agreed with it. Colin Bloom didn't.

Next up was an appeal on behalf of a British citizen, Mohammad Asghar, sentenced to death for blasphemy in Pakistan after writing letters claiming to be a prophet of Islam. His defence team claims he has longstanding mental health issues.

Sunday gave every impression of joining the appeal for his release, sympathetically interviewing Catherine Higham of Reprieve, who has been assisting Mr Asghar's legal team. They discussed the problem of perceptions of mental health problems in Pakistan and what the UK and Scottish governments are doing. Interestingly, William asked whether there is much support for Mohammed Asghar from the Muslim community in Britain. Kate didn't know but said she hopes so. That suggests to me that, no, he isn't getting much (or any?) support from the Muslim Community in Britain. William chose not to pursue that point any further though.

It was onto the North-South divide in England next - a variation on Sunday's usual 'Anglican row' feature.

Statistics show that the majority of C of E clergy want to work in southern parishes. The BBC's Bob Walker reported (without ever mentioning the thought that crossed my mind, that the stats will inevitably be strongly skewed to the south of England by dint of the fact that a lot more people live in the south). We heard from various northern clerics saying that it's a shame and that more southerners should much up north, and from various southern clerics saying that it's not so cushy a job down south as Bob Walker kept suggesting. There's 'deprivation' everywhere, apparently. One suggestion for the imbalance was that lots more clergy are married these days and that their wives need jobs, and that there are more jobs down south than up north.

Belgium's decision to allow euthanasia for terminally ill children of all ages (if they request it) was discussed next. This was impeccably balanced, featuring Madeleine Teahan of the Catholic Herald and Professor Iain Brassington of Manchester Uni. There were also clips of pro- and anti- Belgian campaigners. Madeleine is horrified. Ian supports the move. William Crawley conducted this discussion well, largely standing back, and a respectful, intelligent discussion between two people of very different outlooks ensued. That's as it should be.

I can't be quite so fulsome about the final discussion. It was about gay marriage and was another 'Anglican row' story. Anglican bishops have said that gay clergy in the Church of England mustn't marry.

Sunday regular Rev Colin Coward of the LGBT-advocacy group Changing Attitudes was interviewed first. He's very unhappy about it, says it will lead to "a pastoral disaster" and "a purge of gay people". William challenged him over one hyperbolic statement, but otherwise let him have his say. Next up came Steven Croft, Bishop of Sheffield, speaking for the bishops. William challenged him noticeably harder, interrupting him often, and asking if the bishops risked confirming the perception that the Church has "irrelevant views." That's more like the Sunday I know.

And that's it for this week. See you next Sunday.
Posted by Craig at 09:55