Hmm, what to make of Evan Davis's interview this morning with Lord Chris Smith of the Environment Agency, over the ongoing flooding in Somerset?

Was Evan too gentle with him, as some at Biased BBC have claimed?

Well, yes, I do think Evan was too gentle with Chris Smith.

I wouldn't have wanted him to be rude (as he can sometimes be) but for a man in the eye of the storm at the moment (semi-figuratively speaking) Chris Smith could have and, surely, should have received a much tougher ride from Evan.

He could/should have expected many more interruptions, no concessions for him to carry on and finish his point after an attempted interruption, far more challenging questions, and lots more contradictions. He was spared that ordeal, thanks to Evan.

As a bit of a softie at heart, I did rather warm to Chris Smith's vigorous defence of his staff, but he sprayed a lot of dirt over the present government during this interview and deserved to be challenged more robustly - especially given the multitude of questions being flung him way by the press, most of which Evan didn't put to him.

Shouldn't those connection have been mentioned as soon as Lord Smith began attacking the present government?

Plus, why did Evan call Eric Pickles "Pickles" in such an off-hand manner during his invitation to Lord Smith to respond to the Community Secretary's criticism of him? Would he ever call Chris Smith  just "Smith"?

That said, I was about to fume about such things when Evan sprang a couple of surprises on the boss of the Environment Agency that came close to stopping me in my tracks.

The first was a clip from an interview he gave to Today a couple of weeks earlier. This showed that, in apparent contradiction to his present protestations that the dredging of the rivers in the flood-hit areas of Somerset had been scuppered by government funding cuts, Lord Smith had stated very clearly (two weeks ago) that dredging would have a small effect on stemming flooding in the area.

So that was a tick for Today.

Unfortunately, that tick was then crossed out by the fact that Evan allowed - yes, allowed - Chris Smith to get away (quite blatantly) with massaging the language here (in true Yes Minister/Thick of It fashion) and glossing over the "small" part of his statement from two weeks ago, thus allowing him to pretend that he was being consistent when, very plainly, he wasn't being remotely consistent at all.

(Lord Smith said he was right back then, as he's right now. Our survey says (as they used to say on Family Fortunes), uth-urrrhhh!)

Why didn't Evan pick up on this obvious attempt to smooth away an inconsistency, and challenge it?

The second surprise was the bigger one - and seemed, initially, to reflect well on Today.

Evan produced an Environment Agency document from March 2008 (presumably discovered thanks to Mr Google) which showed that the EA seriously considered that the area of Somerset now being ruined by flooding should be flooded.

Evan pursued that point, and said the programme would tweet the document so that listeners could form their own judgements.

Well, so can you. You too can read that document, here.

It suggests six alternatives for dealing with flooding. Measure 6 is:

Take action to increase the frequency of flooding to deliver benefits locally or elsewhere, (which may constitute an overall flood risk reduction, e.g. for habitat inundation). Note: This policy option involves a strategic increase in flooding in allocated areas, but is not intended to adversely affect the risk to individual properties.

The area now affected by flooding is shown on a map as being an 'Alternative 6' area - an area where increased flooding was considered a worthwhile step by the Environment Agency.

This, obviously, is potentially highly damning to the EA.

As the document comes from March 2008, however - i.e before Chris Smith was appointed to head the EA - His Lordship was easily able to brush the matter off as being 'before my time' and 'not our policy now', and to say he'd 'never seen it before a day in my life' (to paraphrase Hugh Grant's friend Divine Brown).

Plus, to be fair to the EA, I myself see the words 'draft' and 'consultation' plastered (in bold capitals) throughout that document.

So, checking that out (via Evan's Twitter), I thought 'OK, maybe Chris Smith has a point after all', and was ready to concede that point.

...thanks to Alan at Biased BBC, I now know something about an Environment Agency document Evan didn't mention -  one from 2012 (when Lord Smith had been head of the EA for some time), and which doesn't include the word 'draft'... 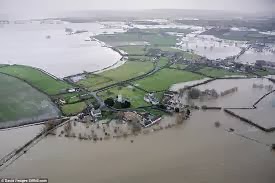 With further hat-tips to Alan, here's what that document says - and it's a strong echo of our old friend, Measure 6:

Policy Option 6 -  We will take action with others to store water or manage runoff in locations that provide overall flood risk reduction or environmental benefits. By adopting this policy and redistributing water some areas will be subject to increased flooding while others will benefit from reduced flooding. The aim is to achieve a net overall benefit. The distribution of floodwater between moors can be determined to some extent by the use of sluices and other structures on the rivers.

The distribution of floodwater has developed to some extent by historical ‘accident’ rather than design. When considering the distribution of assets across the sub-area it makes sense to direct water to areas which have limited assets at risk. By redistributing floodwater, primarily from upstream of Langport to the King’s Sedgemoor Drain, the overall damage and disruption from flooding would be reduced. Other redistribution options may also be possible, although modelling has shown that technically not all options are feasible.

The King's Sedgemoor Drain is one of the areas most affected by the present floods.

If  BBC Radio 4's Today had pursued that matter, Lord Smith would not have been able to slip himself away from responsibility, would he?

It looks very much as if Today - for whatever reason - really dropped the ball here...

...whether for reasons of bias, or mere incompetence, you decide...
Posted by Craig at 21:12