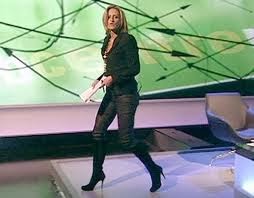 For those of you who just couldn't face watching it, here's this week's run-through of the stories covered by BBC Two's not-very-widely-watched Newsnight - part of our ongoing project to see just what subjects they choose to cover over a long period of time.

This is basically what you missed: Flooding, a gentle ride for Lord Smith of the EA, and a rough ride for Philip Hammond MP. Lots and lots of talk of climate change. Another plug for a Labour proposal. A spot of BBC naval-gazing over men-only panels on game shows. A report about rhinos I just couldn't face watching. A tribute to a left-wing academic. A row over an MOD purchase. Women bishops (Jeremy Paxman's incredulity that anyone could seriously oppose the idea being made very apparent). Kamikazes (interesting). Scottish independence (Kirsty v Alex, as chilly an encounter as ever). Aid as a trojan horse for terrorism in Syria (laudable). Afghanistan. Some artist I'd never heard of who inspired pop art and Brit art. Phone hacking. And a typical Ian Katz-style St. Valentine's Day feature - something geeky and frothy about technology and a plug for a film.

Or, to put it more formally:

Monday 10/2:
1. Who should we blame for the flooding? Interview with Labour peer Chris Smith of the Environment Agency.
2. Labour's pledge to redistribute power. Interview with Labour MP Liz Kendall and Matthew Taylor, former Tony Blair advisor.
3. The threat of extinction facing rhinos due to the Far Eastern desire for quack medicines. A report.
4. The BBC's plans to ensure women appear on all TV panel shows. Interview with Maureen Lipman, Lucy Porter and Jan Ravens.
5. A tribute to left-wing academic Stuart Hall. Interview with admiring film-maker John Akomfrah.

Tuesday 11/2:
1. The politics of the floods. Will they make or break political careers? Interview with Conservative MP Anne McIntosh and Labour's Ben Bradshaw.
2. A controversy over the government's plan to buy some expensive fighter bombers.
3. Women bishops. Interview with Rev Rose Hudson-Wilkin, chaplain to the Speaker of the House of Commons, and Susie Leafe, of the General Synod of the C of E.
4. The government of Japan wants UNESCO to add some letters from kamikaze fighters to a register of objects vital to world history. The Chinese are unhappy. Interview with Danny Rackman, a former torpedoman with HMS Formidable who faced kamikaze attacks, and Yuuichiro Nakajima, the son of a kamikaze pilot.

Wednesday 12/2:
A special on the flooding, with Conservative minister Philip Hammond facing an angry flood-hit studio audience in the Thames Valley.
Plus the question of whether the floods are to do with man made climate change. Interview with Sir David King, former government scientific advisor, and Alexandra Von Huffelen, vice mayor of Rotterdam, both of whom believe the floods are connected to man made climate change.

Thursday 13/2:
1. Westminster politicians say Scotland won't keep the pound if the Scots vote for independence. Interview with Alex Salmond of the SNP.
2. Are aid convoys to Syria trojan horses, following the news that a British suicide bomber travelled that way to fight in Syria? Interview with Imam Qasim Rashid of the Al-Khair Foundation charity & Henry Smith, Conservative MP for Crawley.
3. 65 detainees released from prison in Afghanistan against the U.S.'s wishes. A report from the prison.
4. The Wythenshawe and Sale East by-election. The count begins.
5. Who is the greatest British artist of the 20th Century? Was it Richard Hamilton? A retrospective opens at Tate Modern. Interview with Guy Jennings of Christie's, Lucian Freud's muse Sue Tilley & Doctor Rebecca Daniels, author of Francis Bason: Incunabula.

Friday 14/2:
1. Should we abandon those coastal communities that are too expensive to protect from rising sea levels caused by climate change? Interview with Heather Shepherd, National Flood Forum & Jaap-Jeroen Flikweert, a flood and coastal management advisor.
2. Piers Morgan has been interviewed by police over phone hacking. Steve Hewlett of the Guardian reports.
3. The phone hacking trial. Rebekah Brooks will take the stand soon. Interview with Steve Hewlett of the Guardian.
4. Falling in love with your computer. Virtual personal assistants. A report followed by an interview with Spike Jones, film director, who has a film out on the subject.