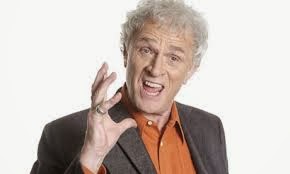 It's a curious thing, but right-leaning blogs about BBC bias tend to pass over Laurie Taylor's longstanding Thinking Allowed on Radio 4.

From time to time, on blogs like Biased BBC, you might see the occasional comment about it (usually from ChrisH), but these are rare events, and I myself have never written about the programme before. (I've thought about it but never done it.)

Given that on any objective analysis Thinking Allowed has just about the strongest left-wing bias of any Radio 4 programme you might expect it to be a much more regular target for criticism - a low-hanging fruit, particularly ripe for plucking by the BBC's right-leaning critics.

Perhaps the absence of criticism on forums like this can be accounted for by the likely 'fact' that right-leaning people just don't listen to Thinking Allowed.

They've probably heard it once or twice before, perhaps many years ago, and decided (almost unconsciously) to give it a miss thereafter, having come to the quick conclusion that it's not for them.

But why wouldn't it be for them? The subjects are certainly interesting and wide-ranging.

Well, all I can say is that the treatment of those subjects tends to come from a particular, staunchly left-inclined standpoint which seems so remote and wrong-headed to many right-wingers that they can hardly help but feel alienated from it.

The reason for that, surely, is that Thinking Allowed's subject area is Sociology - and Sociology itself has a strong left-wing bias - often a strong very-left-wing bias.

Academics in the field are overwhelmingly left-wing too and some of them even have highly left-loaded (and spoof-sounding) job titles like "Lecturer in Race and Resistance Studies". (Peter Simple fans will appreciate that).

But also perhaps not.

After all, everyone knows that's just the way it is with Sociology.

Similarly, everyone knows that that's just the way it's also going to be with a Radio 4 series which projects Sociology to the world.

Thus, if there's an edition of the programme which discusses the sociology of music, you would hardly be surprised if the academic being interviewed suddenly attacked the austerity programme of the present UK government (out of nowhere), or if the presenter (a Sociology professor himself) grilled that self-same academic over his failure to focus on what really matters - left-wing protest songs. Nor would anyone bat much of an eyelid if a "US lecturer in Race and Resistance Studies" (yes, really) used her opportunity to talk about British Asian pop music to denounce British racism towards "Asians".

That's just the way thing are, isn't it, in the world of Sociology? And Thinking Allowed?

That music edition was broadcast a couple of weeks ago. A week later, that genuine job title - "lecturer in Race and Resistance Studies" - was echoed by a UK scholar. She's written a book about prostitution called Prostitution in the Community: Attitudes, Action and Resistances.

And that's the way Thinking Allowed is too.

If Laurie Taylor uses his Radio 4 platform to criticise private education, then we just accept it. If he enthuses over sociology students putting their subject into practice by opposing 'the cuts', then we accept that too. It's just the way things are. BBC Editorial Guidelines? They don't apply here, it seems.

Plus Laurie is so genial, so confiding, so personal. He could be blogging for us - which is disarming.

They may all have misunderstood what they were describing and projected a wrong-headed interpretation onto it, but they weren't entirely not worth listening to.

Plus it really is refreshing to have a programme which is so openly intellectual, so un-dumbed down.

Still, it's not really the programme for me.

All the jargon, all the old mutton tropes dressed up as academic lamb, the perverse-seeming angles, the lack of resonance with what seems to be how most people actually think - all the sociology - puts up a largely impenetrable partition between their reality and my reality.

To my way of thinking, anyhow.