Dawn; and as the sun breaks through the piercing chill of night on the plain outside Korem, it lights up a biblical famine - now, in the 20th century. “This place,” say workers here, “is the closest thing to Hell on earth.”

So said Michael Buerk in his iconic 1984 report on the famine in Ethiopia. The report that inspired Bob Geldof to create Live Aid. It was a remarkable report, it fired up people with the will and the clout, to ‘do something.’ It galvanised the West into taking action.

“But we can now see how this event has backfired, despite the best of intentions. It was founded on a misconception, promoted a patronising view of the world and encouraged the idea that soundbites, stunts and simplistic gestures can heal the most complex problems. The result is the triumph of cheap emotionalism and celebrity politics — and, unfortunately, damage to the continent it sought to help.”

So, in hindsight it seems the outcome wasn’t quite as intended, but I have little doubt that at the outset the intention was good, and didn’t Julia Somerville sound nice in the days of pre estuary pronunciation?

“His cool, dispassionate style was later to be praised by his BBC colleague, John Humphrys.”

says this “On This Day” web article about Michael Buerk.  In an interview in the  Guardian John Humphrys was asked:


"Would Michael Buerk's reports have been more effective if he had been holding back the tears as he delivered the commentary?"  "No... He wrote a spare and powerful commentary and left it to us to form our own judgement."

In a pale imitation of Buerk’s style, Jeremy Bowen visits the scene of a horrific incident during Israel’s 2009 retaliation for years of rocket attacks, code name ‘Operation cast Lead.’
A Palestinian doctor who had been trained in Israel and who worked in an Israeli hospital discovered that the IDF had fired on his house, and that some of his daughters had been killed in the most harrowing, gruesome way. Beheaded by the blast.

This is how the College of Journalism describes Bowen’s style. Sound familiar?

“Watch Jeremy Bowen as he reports from a bomb site in Gaza in 2009. His commentary on what he sees as he walks around the room is cool, clear, dispassionate, and powerful.”

But Bowen, you’re no Michael Buerk.

The trouble is, over at the BBC College of Journalism, they think he is. They think Bowen’s  report is an example of exemplary journalism, which I think is an exemplary example of a wrong-headed evaluation. 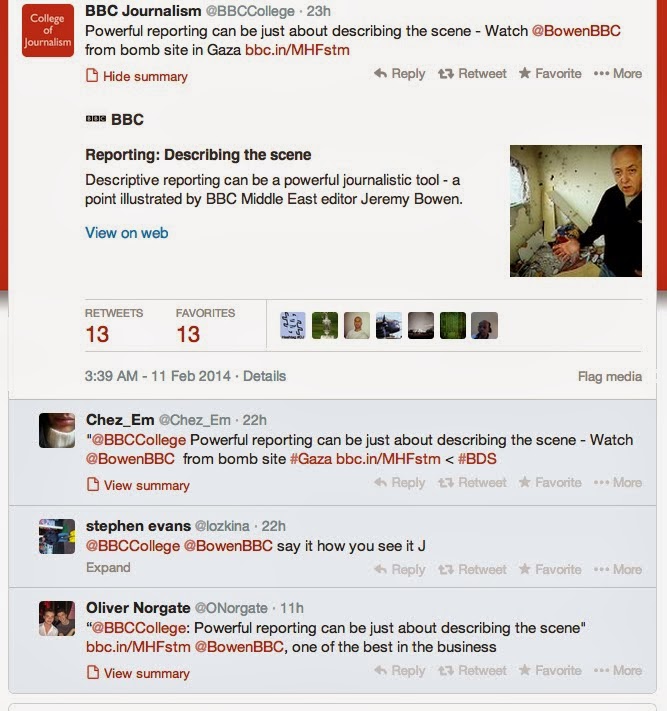 It’s like listening to effusive praise of plagiarism coming from someone who hasn’t even heard of the original.  In fact it IS the praise of plagiarism. Bowen’s report is a travesty of Buerk’s dispassionate delivery, and while Buerk’s intention and the intention of those galvanised into action by his report was admirable, Bowen’s report was inflammatory, misleading and malevolent, and the jury’s out as to whether or not the galvanising has been as ‘effective’ as was the 'original'.

The feigned ‘sad but exasperated’ delivery -  pained to have to be describing such a horrific scene - but those attuned to Bowen’s sophistry will detect an almost  palpable relish at the opportunity to send out yet another defamatory message about Israel. “It’s the Israelis, stupid.”

It sounds heartless to say it but mentioning the victims by name, the almost gratuitous pathos-inducing focus on the dead girls’ possessions - these are typical propagandistic devices,  like those ‘teddy bears on top of rubble’ that appeared everywhere at that time, during that war.

In fact the whole clip smacks of Jon Donnison’s misguided Tweet, which consisted merely an image of a dead or injured child, apparently designed to emote the Israelis’ penchant for child-killing. It should have been an absolute embarrassment when it turned out to be that of a Syrian child killed in Syria and nothing to do with Israel, rather than being brushed aside with that familiar excuse “we know that sort of thing goes on in Israel anyhow.”

Then there was the relentless promotion of another child death, the incident in which the small son of Jihad Mashhrawi was killed by a rocket. The BBC did what it could to take that incident, along with its numerous accompanying images, and promote it to iconic status, and no doubt if it wasn’t for the fact that it too turned out not to be the fault of Israel, that mischievous cluster of reports would also be touted as exemplary journalism.

As Israel’s self-policing efforts are automatically pooh-poohed by those with the will to do so, it’s not much use citing this, but if it’s really the case that the family ignored warnings to evacuate, as this report says:

“The IDF Spokesperson Unit stresses that in the days leading up to the incident, Dr. Abu El-Eish was contacted personally several times by officers in the Coordination and Liaison Administration in order to urge the doctor to evacuate his home, as many others already have, because of Hamas operations and the intense fighting that was already taking place in that area for several days.The IDF Spokesperson Unit also emphasizes that in addition to the personal contact made directly with Dr. El-Eish, the IDF issued warnings to the residents of Sajaiya by dropping thousands of leaflets as well as issuing warnings via Palestinian media outlets.The investigation of the incident was conducted by the commanders of the forces in the area, as well as the division commander, and was approved by GOC Southern Command and the Head of the IDF Operations Branch (both ranking Major Generals). The IDF is saddened by the harm caused to the Abu El-Eish family, but at the same time states that considering the constraints of the battle scene, the amount of threats that endangered the force, and the intensity of fighting in the area, the forces' action and the decision to fire towards the building were reasonable.”

then we should at least be told. If this is true, and I tend to have faith in the honesty of the IDF and their spokespersons, the horrific deaths of those innocent girls was still a terrible tragedy but it does cast a different light on the situation, at least in the way it was reported on and wallowed in by Bowen.
I’d like to know, for example has Dr El-Eish ever been questioned or made a public statement about this? I’ve tried looking online but I couldn’t find anything detailing any warnings he might have been given, or anything about notice being given to him by the IDF requesting he evacuate his family, though I have heard that firing at the IDF was known to have come from the house next door.

Bowen's report was a horribly graphic evocation of the brutal reality of war, but it’s far, far from exemplary journalism. It’s emotive, inflammatory, stripped of context, and those who are accustomed to Bowen’s style of reporting can spot underlying triumph behind the sorrow when they see it.
The fact is that this report is “a  triumph of cheap emotionalism” over journalism and a far cry from exemplary — and, to parody the Daily Mail, unfortunately, it does damage the country it sought to damage.
The ‘War is terrible’ brand of journalism isn’t my idea of exemplary journalism, but if you are going to go down that road, for balance you need to give due attention to the other side, that is unless you deem the other side beyond the pale. Take for example Dieudonne’s recent ‘opportunity knocks’ feature on Newsnight. Even 'his side of the argument' was given an airing. But maybe the BBC doesn’t consider barefaced antisemitism beyond the pale.

So imagine, for a moment, the Jeremy Bowen treatment being given to, say, the Fogel family’s tragedy, a gruesome multiple murder which the BBC neglected altogether because of blanket coverage of the Japanese tsunami. Would the College of Journalism call such a thing exemplary? No, they’d call it a hallucination, because that’s all it would be.

And, it isn’t as if the Israeli media ignored the terrible plight of Dr El-Eish. You can see it unfolding on Youtube. It just boils down to who you gonna trust, and the BBC obviously trusts the rhetoric of the anti-Israel, Palestinian solidarity movement and their ilk over and above the words of anyone from  “an historic, beautiful and friendly country that has given much to world civilization. In its recent reincarnation as a modern state, Israel continues to bestow its gifts—scientific, technological, literary, artistic and academic.” to quote from this article, potentially a subject for another day.