Ukraine if you want to. The BBC's not for Yanukovych 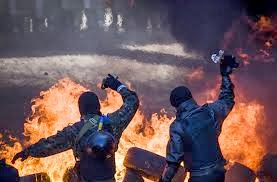 I was going to post something yesterday about Tuesday night's Newsnight and its coverage of the latest upsurge of political violence in Ukraine but ran out of time. Still, an extra day's wait gives me the chance to add Wednesday night's coverage to the mix.

I'll begin with what I wrote yesterday...

We've noted before here at Is? the BBC's tendency to side with protesters during these kinds of uprising - and, indeed, specifically during the past few weeks of the Ukrainian protests. So it wasn't particularly surprising to note that all the programme's 'talking heads' (from the Chatham House expert in Allan Little's report to Jeremy Paxman's two interviewees) were sympathetic to the opposition.

The 'talking head' from Chatham House was Orysia Lutsevych. Her views can be gauged from an article she' written for the FT called Do not fail Ukraine in its battle for European values. Similarly, Jeremy's expert interview was Professor Timothy Snyder of Yale University is another sharp critic of the democratically-elected pro-Russian President Yanukovych, who describes his regime as a new dictatorship. Jeremy's other interviewee was an opposition MP, Rostyslav Pavlenko of the pro-European Udar Party. You can guess his views.

The other (pro-Russian) side didn't get much of a look-in.

To repeat my earlier speculations, if we accept this as further proof of bias, is this because the BBC is (a) trying (and failing) to report impartially, (b) faithfully reflecting official British foreign policy objectives (being an Establishment poodle), (c) reflecting its own pro-EU, given that the anti-government protests are also strongly pro-EU, or (d) just being its usual excitable self about 'people power', protests and 'revolutions' - displaying its teenage student 'Woolfie Smith' side perhaps?

Well, last night's Newsnight again began with Ukraine, and there was another report from a BBC reporter embedded (so to speak) with the protesters, in the course of which we heard again only from the anti-government side of the Ukrainian political landscape.

This surely isn't a good thing, given that all manner of opinion polls show a nation pretty much split straight down the middle (both percentage-wise and geographically). It would, therefore, be interesting if BBC reporters went out and tried to bring us interviews with those from the other half of the Ukrainian population too.

Still, we then did get to hear from the other side of the argument during this edition of Newsnight - namely Ukrainian vice prime minister Kostyantyn Gryshchenko, a softly-spoken ex-ambassador. Jeremy Paxman interviewed him and, though asking him questions that placed him 'in the dock', did so without undue aggression or much interruption, so there can be no cause for complaints there.

I'm still sensing though that the BBC is getting far too close to one side of the argument, and I'm missing (in their Newsnight coverage at least) some things I keep picking up from elsewhere - i.e. that it's the extreme nationalist elements which are ransacking buildings and keeping the violence against the government going and that the Ukrainian ultra-nationalist camp is by all accounts, strongly imbued with anti-Semitic elements. Not all the anti-government protesters appear to be democrats.

Yes, the government (who seem largely to consist of Spitting Image caricatures of Leonid Brezhnev) appears to be brutal, cack-handed and well-deserving of the boot (electorally-speaking), but the opposition may not be all they're cracked up to be either.

There's a very interesting analysis from Alberta/Sheffield-based professor David Marples on the Current Politics in Ukraine website which reviews such concerns, and ends:

Unfortunately, it seems, the era of objective reporting, insofar as it can exist or ever existed, is over. It has been replaced by simplistic evocations of the virtues of Western democracy versus the perils of Russian authoritarianism, illustrated by the evil president (Vladimir Putin) and the bloodied journalist (Tetiana Chornovol) or opposition leader (Yuri Lutsenko). In taking such stances, Western observers insert their own beliefs as the best for the people of Ukraine. Their cause is our cause. But we need to adopt a broader perspective, one that encompasses the views of all residents of Ukraine. Revolutions are complicated affairs, and there is always more gray than black and white.

Something like that seems to be going on with the BBC, as far as I can see.
Posted by Craig at 20:07