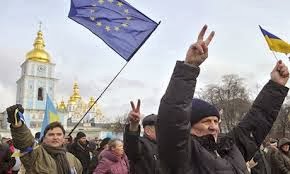 Still sticking with Thursday night's Newsnight (which majored on the conviction of Foxy Knoxy), it's fair to say that some BBC reporters certainly get about...

The BBC's Gabriel Gatehouse was, I thought, their man in unhappy Central Africa - or, given that he turned up in South Africa for Nelson Mandela's funeral, simply their man in Africa. However, then he turned up in Israel, speaking in an authoritative voice, about the death of Ariel Sharon. Now here he is on Newsnight, speaking as if he's an expert, in Ukraine, talking Ukrainian politics.

As one of those rare BBC watchers who gives a flying f*** (fish) about foreign affairs, I pronounce myself duly baffled by Ukrainian politics. Gabriel sounded no less baffled than me.

Rod Liddle in the Spectator, however, wonders "if we are getting a true picture of the mood within Ukraine on our excitable daily news programmes". Yes, there's fury in Kiev and Western Ukraine but "the country’s four largest cities, after Kiev, have been very quiet", he says.

Incidentally, recent rolls have found that between 45% and more than 50% of Ukrainians support the pro-western protests (Euromaidan), while a proportion between 42% and 50% are opposed. Most of Euromaidan’s support is concentrated in Kiev and western Ukraine. So not quite as clear cut as it would appear.

The tendency of the BBC to become "excitable" when it comes to protests is marked. They also seem to assume that large numbers of visible protesters on the streets is necessarily the expression of the majority view of people of those countries (see their coverage of 'The Arab Spring' or anti-cuts/anti-war protests here).

A classic example of a BBC reporter getting over-excited and making this deeply dodgy (and biased) assumption was highlighted by this week's Newswatch. In came on Sunday's News at Ten where the BBC's Steve Rosenberg reported from Kiev, saying:

During the night protesters besieged an exhibition centre near Independence Square. They'd received information that 200 police officers were stationed inside. They used fireworks and rocks to break in. Police retreated. Later citizens streamed into the captured building. The only exhibition on today was a display of people power.

Newswatch viewer Steve Woolf made the obvious point in reaction to the closing words of Steve Rosenberg's report:


Steve Rosenberg describing the take-over of the exhibition as 'people power' is value-laden reporting, as would be the phrase 'mob rule'. Surely an experienced reporter should be able to find neutral terms or does the BBC have a hidden agenda of supporting anti-government action in Ukraine?

Or Steve Rosenberg might just have got carried away by events that night.


Update (20:16): Given all this, I was curious to test out how tonight's PM on Radio 4 would deal with the story. Would it seem to be taking sides against the Ukrainian government? Well, first we heard from a BBC reporter - Lyse Doucet no less - who gave us the views of an opposition activist, the Russian foreign minister and the head of NATO, who tweeted his disapproval of a Ukrainian government statement. Then, we heard from EU 'high representative' Baroness Ashton's spokeswoman, attacking the Ukrainian government, who gave a full-length interview to presenter Bridget Kendall. I'd describe that as leaning markedly towards the protesters' side.
Posted by Craig at 10:30