Where do butterflies go in winter? 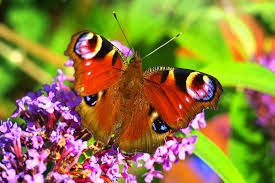 The second pre-Sunday Radio 4 programme I want to light sacred fires in praise of was The Living World - a programme which answered several questions that I've had fluttering around my head for many, many years now, all grouped around a central question: Where do British butterflies go in winter?

It was slightly too late for me though.

I found a red admiral in our bathroom a week or so ago. It was awake and flying around. Central heating and the relatively warm temperatures outside must have roused it from its dormancy. It had made the mistake of wintering somewhere in my house. I opened the window and guided it out, suspecting that this was a better course of action than leaving it bewildered indoors, possibly dying.

I now learn (from The Living World)  that I was right to help it to a better wintering place than my centrally-heated house. However, unless it finds its own way to a better resting place (and fingers crossed for the poor thing), I should have captured it (in a glass) and moved it into my garden shed allowing it to remain dormant until the spring comes. Britain's winter wildlife looks ravenously upon an active butterfly.

That said, also courtesy of The Living World, I now know that it looks just as ravenously on a dormant butterfly.

So, besides my house, where do British butterflies go in the winter?

Well, for starters, let's get that old myth out of the way via a joke:

My wife just said to me, "Did you know, butterflies only live for two days?"
I said, "Darling, I think that's a myth."
She said, "No, it's definitely a butterfly."

Four British butterfly species remain in adult (butterfly) form throughout the winter and in warm weather go into action - the peacock, the small tortoiseshell, the comma and the brimstone. In the past couple of decades, quite a few red admirals (who used to migrate to Britain in the spring whilst wintering on the continent) have starting over-wintering in the UK (including mine).

Now some of you may not like this but The Living World hinted (ever so discreetly and briefly) that this might be down to climate change. (What kind of climate change - natural or man-made - they shrewdly refrained from saying).

The stars of the show were peacock butterflies.

I do like peacock butterflies. We had a near invasion of them a few years back. Beautiful creatures.

Peacocks are brilliantly 'designed' by natural selection to fend off predators. They rapidly open their wings to expose those startling owl-like 'eyes', thus sending some predators scuttling off in terror. They also emit a hissing sound (through wing action) and emit ultrasonic clicks which, apparently, scare the bejesus out of nocturnal predators. They still suffer massive predation, but more than enough survive to mean the species is in no danger.

Incidentally, I also learned from this programme that mice are active hunters of butterflies, biting off the inedible wings and chomping only on the main body of the flying beast. Did you know that?

The BBC Natural History Unit, which produced this programme, has evolved over many years. By a vigorous flapping of its brilliantly-coloured, technologically-exquisite wings, it helps disarm predatory attacks from BBC critics. Its mega-fauna, such as the silverback gorilla (Davidus attenboroughis), act as camouflage for its less popular species, such as wasps (Vespula newsroomis) and dung beetles (Phanaeus radiofouricus comedianis).
Posted by Craig at 18:24