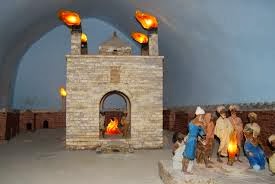 The hour in between that repeat of Four Thought and Ed Stourton's Sunday was taken up by two programmes that I actually enjoyed listening to, and as it's written into this blog's Editorial Guidelines that we must offer the occasional bouquets (amid all the brickbats we lob at the BBC), I'd like to write about them too, starting with Something Understood.

This dealt with the burning subject of fire, both its creative and destructive aspects.

I can understand her fascination with flames. Philip Larkin said he'd place water at the centre of any religion he constructed. I think I'd have gone for fire.

The Zoroastrians, of course, had the same idea and Samira noted something I've never actually thought about before - that when the conquering armies of Islam took over Persia and began oppressing the Zoroastrians there, they systematically put out all the eternally-burning flames in their fire temples, (literally) attempting to snuff out the indigenous religion there. Wikipedia also tells me that the Muslim conquerors then began burning Zoroastrian scriptures (a bit of a grim irony there).

The programme took a serious turn when the subject of Nazi book-burning came up. An eye-witness account from one of the writers whose books were being burned, Erich Kästner (of Emil and the Detectives fame), described the experience - including that of a woman pointing at him and saying him name as he watched. As Michael Rosen noted, he seemed slightly amused at that - not knowing what was coming, when a woman pointing at you could lead to something even worse.

We also heard about my favourite composer Jan Sibelius's self-harming/self-helping destruction of the score the world was waiting for (and would have to wait forever) - his Eight Symphony. Only fragments survive of what seems to have been a complete score. He burned it, page by page.

The programme didn't mention though the heart-breaking experience of the Norwegian composer Geirr Tveitt - a story that always make me gulp a bit. His house burned to the ground, incinerating four-fifths of his extensive life's work. (If you want to hear a great example of what survives, YouTube helps).

We also heard part of a poem by Yeats - a poem , I confess, I first thought was by T.S.Eliot. It is a bit Four Quartetsish though, isn't it?:

I
Between extremities
Man runs his course;
A brand, or flaming breath.
Comes to destroy
All those antinomies
Of day and night;
The body calls it death,
The heart remorse.
But if these be right
What is joy?

II
A tree there is that from its topmost bough
Is half all glittering flame and half all green
Abounding foliage moistened with the dew;
And half is half and yet is all the scene;
And half and half consume what they renew,
And he that Attis' image hangs between
That staring fury and the blind lush leaf
May know not what he knows, but knows not grief

Dr Matthew Juniper of the University of Cambridge told us about the problem faced by aircraft engine manufacturers.

If you put a flame into a confined space it can make a lot of noise and so much energy goes into making that noise that it can destroy the engine. A guy called Higgins notice the phenomenon in the 18th Century, who spotted that the candle flames at a dinner party were dancing in time with the music. He then experimented by putting a flame inside a tube. It behaves just like an organ, with the flame amplifying its natural frequency. So it sings as well as dances (as Samira put it, rather poetically). As you burn a flame at a lower temperature it becomes far more susceptible to this dancing and singing. If you burn a flame at a lower temperature in a plane or car engine, you produce less nitrous oxide and less harmful pollutants into the atmosphere, said Dr Juniper. So how do you keep a flame in an engine cooler whilst maintaining its stability? Well, that's the task for engineers.

There was plenty more fine stuff in the programme too.
Posted by Craig at 15:12