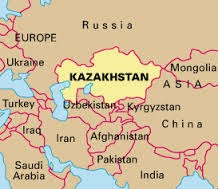 According to the BBC News website's News from Elsewhere section,

The president of Kazakhstan has apparently suggested changing the country's name, saying the "stan" at the end puts off tourists and discourages investors.

Now, personally, I can't for the life of me think why any self-respecting president of Kazakhstan wouldn't want to have his country's name associated with, say, Pakistan or Afghanistan. The suffix '-stan' surely brings nothing but happy connotations with it. If the EU changed its name to 'Europistan', everyone would want to stay inside it. (What's that, Nurse Ratched? It's time for my medication again you say?)

What made me do a (non-literal) double-take though was the closing paragraph of the BBC's article:

But don't expect Kazakhstan to rename itself any time soon. Mr Nazarbayev - who has held power since independence from the Soviet Union in 1991 - says such a change would only come about after a discussion with the people.

Er....President Nursultan Nazarbayev (who fancies changing his country's name to Kazak Eli - or 'Land of the Kazahks') has never struck me as being the kind of Kazakh president who consults the people overmuch. Or at all. He doesn't rule by focus group, or democracy.

Few doubt that Kazakhstan will receive a new name, should the veteran leader decide so.