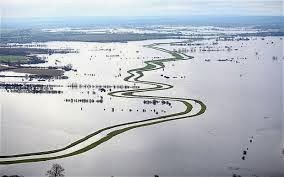 OK, back to Newsnight...

First last night's edition, which began with the flooding in Somerset.

Both presenter Emily Maitlis and reporter Zoe Conway had a pointed dig at UKIP and that councillor who said the floods were God's punishment for British government policy on homosexuality. (Yes, not one dig at the obscure UKIP councillor, but two.)

Still, not even Newsnight could blame UKIP for the flooding. Instead, Zoe listed the main culprits, first and foremost the government - and, by that, was implied the present government, with minister Owen Paterson placed in the frame.

Oddly, you could have blinked and missed the reference in Zoe's report to the Environment Agency - the quango public body run by ex-Labour minister Chris Smith (ahem, Baroness Morgan!). She mentioned them in passing as part of the (present) government.

Many of you will be aware that the Environment Agency has been having a torrid time of it in recent days, and have been taking the heat from many quarters over the flooding. Their policy, taken many years ago (before Lord Smith), of stopping dredging the rivers is held by some in the area as being the main factor in causing the flooding.

Why did Zoe elide over the Environment Agency in mere seconds, and link it (rather misleadingly) to the present government?

The others in Zoe's list of potential culprits were the RSPB (for promoting the interests of bird life above all things), farmers and rich landowners, sheep (pace George Monbiot) and local residents (for living there). Climate change got a mention too, naturally.

Being Newsnight under the editorship of ex-Guardian deputy editor Ian Katz, the obvious guest to the public, NFU rep Stephen Watkins, whose farm is now under water, just had to be put up against flame-throwing Guardian environmentalist George Monbiot.

Poor Mr Watkins was making some sensible point about drainage only to be interrupted and talked over by George Monbiot, ramming home some ideological point. And George kept on interrupting.