Putin, Tchaikovsky, snowboarding and the BBC 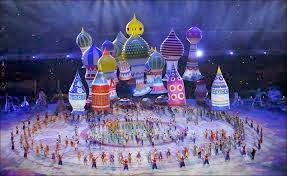 Did you watch the opening ceremony of the Sochi Winter Olympics?

The BBC broadcast it live yesterday on BBC Two.

Not BBC One, obviously, as all right-thinking types disapprove of these games being held in Putin's homophobic Russia, and the BBC is about as right-thinking an organisation as it's possible to get. BBC One wouldn't do for the Sochi Olympics.

So, yes, the BBC gets the glory of broadcasting it - and to bask in any gold medals we might win - but they shove it all on BBC Two because it's a 'bad Olympics' (according to Stephen Fry, The Guardian, etc).

The BBC's coverage of the opening ceremony was hardly a sport-free zone, but it was heavily political too. They even had a BBC political reporter (Daniel Sandford) as one of the three commentators during the ceremony itself. (Has that ever happened before?) The politics of Putin - and his repressive ways - cropped up again and again.

Perhaps that's as it should be.

I had to grin at the BBC's highlighting of the one tiny technical glitch in the Russians' ceremony - a single snowflake failing to turn into an Olympic ring. Hazel Irvine, chief commentator, had a couple of sniggers about that.

What especially made me grin was that the BBC itself completely botched the opening of its coverage. Hazel did her opening spiel. Then the sound went off. Then she read it out all over again. I sniggered at that. All that time and licence fee payers' money, and they completely bungled it.

What of the opening ceremony itself?

Well, if I could have designed my own dream opening ceremony, this is what it would have been like. It was exciting, technically stunning and full of innovative staging, but also very, very beautiful.

What struck me though is how different it was to London 2012.

To make a bold, possibly controversial assertion: If London 2012 projected a left-wing view of the world, then Sochi 2014 projected a right-wing one.

It's as if, to be slightly facetious, the world has switched round over the last thirty years. We in the United Kingdom got a Soviet-style Olympics (complete with heroic workers, a hymn to the NHS and the glorification of progressive social change) and they, the post-Soviet Russians, got a rousing, conservative hymn to the glories of their national tradition.

The Russians exulted in their own alphabet, their flag (raised by cosmonauts) and their landscapes. They proudly extolled the great figures from their past, gloried in their own cultural and scientific contributions to the world (of which there are many) and were unashamed of their empire.

It was a great patriotic pageant of Russian history, sweeping and poetic. I loved every second of it (except, of course, the speeches).

It took us from Russia's beginnings, through a magical, fairy-tale vision of medieval Russia, to Peter the Great and the glittering ballrooms and the literary and musical golden age of Imperial Russia. Then came the cold, dissonant wind of revolution and a harsh nightmare in red, conjuring up the Russian Revolution. A good-humoured, somewhat nostalgic take on the post-WWII Soviet Union (bypassing Stalin) followed, before the little girl at the heart of the ceremony's narrative let the red balloon of communism go and welcomed the new Russia. 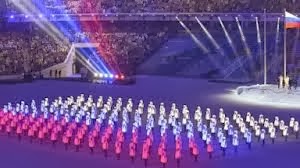 The visual images used to conjure all this up just have to be seen to be believed - and enjoyed.

It really is a curious thing that the whole ceremony - even the bits dealing with communism - was so deeply conservative. It could almost have been designed to appeal as much to conservative-minded people in the West (and elsewhere) as to domestic Russians.

The nostalgic bits for the dying decades of the U.S.S.R. focused on the nice things, people being people, going about their daily lives, Sputnik, Gagarin, the baby boom. (They fairly skipped over the Hammer & Sickle!). It had the feel of an American conservative's vision of 1950's America or a British conservative's vision of 1950's Britain, before Danny Boyle's beloved progressive social changes climaxed - a simpler time. It was affectionate, and a bit tongue-in-cheek.

Another key difference was that the London 2012 was a pop culture Olympics, whereas Sochi 2014 was unashamedly centred on high culture - 'War and Peace', 'Swan Lake', 'The Rite of Spring'. Its soundtrack was largely that of Russia's mighty classical music tradition (from Borodin to Schnittke). The Russian national anthem was sung by a monastery choir, the Olympic hymn was sung as an operatic aria (with chorus) by Anna Netrebko, and the Olympic flame was lit to Stravinsky's 'Firebird'. Ballet ran throughout the ceremony. I loved it!

I've deliberately refrained from reading what other people made of this ceremony, as there will probably be lots of sniffy right-thinking commenters on the radio, TV and newspapers criticising it as 'reactionary' (or whatever's the modern equivalent of that old term of opprobrium). I didn't want them to influence my take on it. (I could be being unduly pessimistic there, of course. Maybe they all loved it.)

I wrote this piece earlier this afternoon but took a break from it, having a life.

A bit like Terry and Bob in that famous Likely Lads episode where they try desperately not to hear the result of a football match, I've found myself being bombarded by snippets of alternative opinion (from various sources, some very close to home), and they suggest that the media is banging on about that incredibly minor technical hitch with the snowflake and the Olympic ring...

I don't know if that's true (yet), but if it is it's absurdly petty on the British media's part.

Thousands upon thousands of complex actions work to perfection, producing around two hours of spectacular magic, and one solitary set of bulbs doesn't work....and yet it's the one set of bulbs not working that gets the lion's share of the attention in Danny Boyle's Britain?

I think that says more about us than it does about Putin's Russia.
Posted by Craig at 17:03