There's a story that's leading the BBC News website at the moment - No 10 'ousting non-Tories from posts' - concerning Labour's Baroness Morgan complaints about being removed as chair of Ofsted. She's blaming David Cameron and accusing Number 10 of trying to stuff public bodies with Conservatives.

You may feel that's a bit rich coming from a former close aide to Tony Blair, whose government massively accelerated the trend towards stuffing quangos with as many of your own party's supporters as possible, but that's politics for you!

Oddly, though the BBC thinks it's the top story in the world at the moment, the Sky News website doesn't even think it's worth reporting. That's a big difference of opinion, agenda-wise.

The BBC News website article is heavily biased towards Baroness Morgan and her Labour colleague Tristram Hunt, with very scant reporting of the Conservatives' side of the argument, and a use of sub-headlines and side quotes which reinforce that sense of bias.

ITV News is covering the story, but isn't placing it so high up its new agenda. Plus its presentation is much more balanced and free from the taint of an apparent agenda, simply describing the story and providing a range of quotes.

Incidentally, Conservative-supporting commentator Fraser Nelson at the Spectator has an interesting graph which, I suspect, is unlikely to appear on the BBC News website in the coming hours.

...a breakdown of public appointments of individuals declaring political activity from the Commissioner for Public Appointment’s Annual Reports. It shows party, as a percentage of those appointed who declare some political allegiance. (Many ex-Labour staffer have since declared themselves to be neutral). 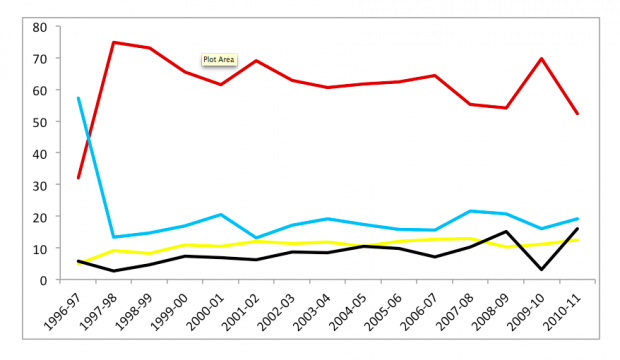 Did the BBC complain much about that massive imbalance after Labour took office? I can't say I remember it (though I could just be being forgetful).

If you are listening to BBC radio or watching BBC TV today, please check if you are hearing the story put in this context by BBC reporters - even if they only mention in passing that the Labour Party has been accused of doing just what Baroness Morgan says the Conservatives are doing now (which isn't too much to ask, is it?).

Given that the BBC News website article contains no such context, I'm not holding my breath.

Update: I tested this out for myself on tonight's PM on Radio 4 and, as expected, Labour's behaviour from 1997 to 2010 wasn't brought up by either the presenter or the BBC reporter. It's as if this sort of placemanship and this entire issue has sprung out of nowhere and is something new, something peculiar to this Tory-led coalition - which is far from being the truth.

Maybe I could re-write that discussion (a few posts ago) on More or Less to meet this context:


Tim: Let's say you're a spokeswoman for the Labour Party BBC reporter and you would like to make the quango appointments row look as serious as possible for the government. How would you do that?

Charlotte: Oh, that's not that hard. First, I'd avoid talking about what happened before 2010.

Further Update (2/2): Well, one day later, and everyone's leading with this following Lib Dem minister David Laws's attack on his own boss, Michael Gove, over the removal of Baroness Morgan.
Posted by Craig at 15:26