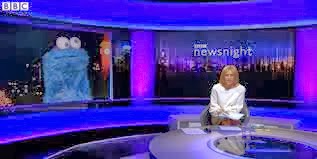 Keeping track of what Ian Katz's Newsnight reports over the past few weeks, a few general trends can already be observed.

One that stands out for me is the way the programme pays close attention to technology, and less attention to general science stories - something that was very clearly reflected in Ian Katz's decision to abolish the role of Science Editor and create a new role of Technology Editor instead.

Tellingly, the sacked Science Editor (Susan Watts) has a degree in Chemistry while the new Technology Editor (David Grossman) has a degree in Politics, which pretty much says it all really.

Anything that ties in technology with social media seems to be of especial interest to them. Twitter, facebook, new apps - those are Newsnight's kind of stories.

Secondly, and possibly mirroring that downgrading of science, is the programme's growing emphasis on arts coverage. (Perhaps the demise of Newsnight Review on BBC Two is helping push that too). Kirsty Wark is visiting more art exhibitions on Newsnight these days.

Thirdly, Ian Katz is clearly aiming at making his programme more female-friendly. Topics he presumes will be of interesting to women are very much on the rise and all female-discussions, whether about comedy panel shows or criminalising prostitution, are becoming more common too. Plus the former 2:2  'gender' balance of main presenters (Jeremy Paxman and Gavin Esler v Kirsty Wark and Emily Maitlis) has now shifted to being more of a 4:1 'gender' imbalance (Jeremy Paxman v Kirsty Wark, Emily Maitlis, Laura Kuenssberg & Victoria Derbyshire).

Fourthly, Ian Katz is clearly aiming to add more jokes, from the Cookie Monster and Kirsty Wark's zombie dance through to the David Bowie impersonator, the clever jokey closing item is becoming a bit of a trademark of 'new' Newsnight.

Of course, many of the old interests of Newsnight - the hurly-burly of 'Westminster bubble' party politics, the big international stories, the deadly serious reports on worthy subjects, the obsession with phone hacking, climate change, the tributes to recently deceased left-wingers - all remain firmly in place.

Other trends will doubtless emerge over time.
Posted by Craig at 13:28