No, there won't be another fracking pun in the title of this post 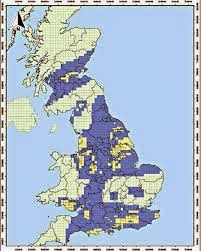 According to a report in The Times (£) the BBC has been accused of bias by the fracking company Cuadrilla and by UKOOG, the industry body which speaks for shale gas companies.

Given the way my local BBC news programme Look North West seems to have a less-than-friendly obsession with the subject of fracking, it's hardly a surprise to read that it's a local BBC current affairs show, Inside Out (Yorkshire and Lincolnshire), that finds itself under (hydraulic) pressure.

The fracking organisations main charges against the programme (broadcast a month ago) are:

(a) that the programme chose to concentrate on claims that the process could damage children's health and environmental disaster.

(b) that they gave undue prominence to the claims of one critic of fracking.

(c) that they introduced that critic as a shale gas expert while his credentials are actually disputed.

(d) that one of the programme's presenters quoted unnamed independent research which claimed the "health of newborn babies within two miles of fracking sites can be severely compromised."

(e) that Cuadrilla was not approached by BBC Yorkshire and Lincolnshire to contribute to the programme.

The Times quotes the BBC's response:

We reject the accusations levelled at the BBC by Cuadrilla and UKOOG. The programme featured a range of industry bodies and experts, as well as the Minister of State for Energy, and presented opposing viewpoints in relation to regulation of the industry.

As this edition of the programme isn't available for re-watching, it's hard to independently judge whether Cuadrilla or the BBC are correct, but what stood out for me from The Times article was the evidence from The Times itself that this had indeed been an error-strewn programme from the BBC - points to which we don't yet have the BBC's response:

The company also challenged the BBC over Mr Hill’s credentials. The programme said that he had worked on oil and gas rigs around the world for 20 years and had “fracked for gas in Africa”. When contacted by The Times, Mr Hill said he had “searched for gas in Africa for two years” and denied fracking for gas there, which he said he had stressed to the BBC before the programme was was broadcast.

The presenters also claimed that the Government had adopted a recommendation by Mr Hill for companies to use a “traffic light” system to monitor for seismic activity during fracking. The Department of Energy and Climate Change said the claim was incorrect, insisting that Cuadrilla had initially proposed the system, which was adopted after recommendations by two government-ordered reviews.

That sounds pretty damning, doesn't it?
Posted by Craig at 11:09

Labels: 'Inside Out', fracking, The times