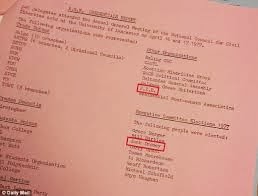 As Sue said in the previous post, Newsnight's Laura Kuenssberg gave Harriet Harman such a forceful grilling that even many of those who had been slating the BBC for refusing to report the swirl of allegations/insinuations surrounding her (up till the point when Ms. Harman denied the Mail's allegations) found themselves having to applaud Laura for her work.

It's certainly an interview that could be marked down in the 'evidence against pro-Labour bias' column of a putative Newsnight bias audit sheet. And it's only right and proper to point that out on a blog that monitors BBC bias.

And Laura continued where she left off on last night's Newsnight, investigating the NCCL's files for herself and finding that the three Labour figures in the eye of the storm - Ms Harman, her husband Jack Dromey and Tessa Jowell - were deeply involved in defining the leading issues of the day and that PIE (the Paedophile Information Exchange) "was part of the conversation that took place at the National Council for Civil Liberties."

There are "countless documents" from PIE in the NCCL archives, she said.

She quoted one of Harriet Harman's senior Labour colleagues" saying "they were amazed that Ms. Harman refused last night to admit the affiliation between the paedophile group and her employer has been a mistake".

"But could a paedophile organisation really have been just another name on the list?", asked Laura - showing us an NCCL list with PIE's name on. She then cast doubt over Harriet Harman's claim that PIE was just "one of over a thousand groups" affiliated to the NCCL and that the NCCL's work was "never influenced by that group":

But this list we found shows the leader of the Paedophile Information Exchange had a position on the NCCL's gay rights committee.

Laura then featured a defender of Harriet Harman, former NCCL executive member Anna Coote [who is now a leading light in the left-wing New Economics Foundation think tank], saying that PIE's agenda "was never shared let alone promoted" by Ms Harman & Co. She said they had no influence whatsoever.

Labour MP Simon Danczuk, however, then immediately cast doubt on that statement:

"It's hard to believe nowadays but we thought it was progressive to take on board the views of paedophiles. I mean, it seems extraordinary in this day and age, but that's exactly what was happening throughout the 1970s and into the 1980s."

"The record on this episode has not yet been left to gather dust", Laura concluded.

Another uncomfortable Newsnight for Labour's deputy leader then.
Posted by Craig at 19:59