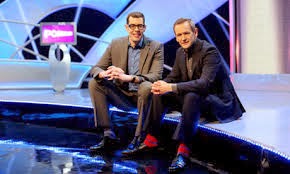 We bought a Sunday Telegraph today and - having not read one (in dead tree form) for donkey's years - I was surprised at the sheer quality of it.

The amount of time, effort and imagination that goes into publishing a Sunday newspaper of such quality, with its many sections and many, many, many hundreds of carefully-wrought articles, is really quite something when you think about it. Even some of the most out-of-the-way by-ways of the inner sections contained fascinating stuff. I don't really have the time to do justice to it though by actually bothering to read most of it, and the recycling bin will receive most of it unread.

This is a blog though, so unstinting praise for anything is surely (as sure as eggs are oval or round objects laid by a female bird, reptile, fish, or invertebrate, usually containing a developing embryo) not to be expected, so....

I'd have commented online at the Sunday Telegraph website about this but they haven't got the feature up yet, so I'll have a moan about it here instead...

It concerns a piece on the third-from-back page of the paper's arts/TV section by Anthony Horowitz, and it's the novelist/scriptwriter's take on TV quizzes.

Anthony found himself appearing as a pointless answer on BBC One's Pointless and confessed to not knowing whether to find that "gratifying or vaguely insulting".

Now, if there's one thing that unites my entire family it's that we like Pointless. We watch it most days. Therefore, we know our Pointless.

Now, if you know your Pointless, can you spot the errors (errors that would surely merit 100 points on Pointless itself) in Anthony Horowitz's description of the show.

Typing directly from my dead tree copy of the Torygraph, here's what he says. Good luck!:

Actually, Pointless - which searches for the most obscure answers to various questions - fascinates me. How can this fantastic celebration of naffness have reached its 10th season? I mean, half of the programme seems to be devoted to watching a column of light travel towards zero. Why does the studio audience burst in applause every time the runner-up trophy, a lump of plastic that seems to have been salvaged from some data processing machine, is shown? The trophy is described as "coveted". Who by and why? Yet the show remains curiously irresistible, and the nation seems to have taken the two hosts, Alexander Armstrong and Richard Osman (who helped create the show), to their hearts.

Well, fellow Pointless watchers, how did you get on? What did Anthony Horowitz get wrong?

(a) the highly-applauded trophy isn't a runner-up trophy. Everyone who gets through to the final round (whether they win or lose) receives one.

(b) that trophy isn't a lump of plastic, it's made of crystal.

(c) The trophy is described as "coveted" as a running joke. It's a naff trophy, and pretty much everyone who watches Pointless (except Anthony Horowitz, apparently) is in on the joke.

(d) There's nothing 'naff' about Pointless (except its trophy). It asks questions on chemical elements, Shakespeare, geography and history, as well as sport and entertainment.

Still, he's right that lots of us (if not the nation as a whole) have taken Alexander and Richard to our hearts.

In many ways they seem to be chalk and cheese. Alexander's posh, Richard isn't. Alexander seems to swing right politically, Richard swings left. (etc). But, still, they seem to like each other a lot. (It's like Felix and Oscar from The Odd Couple all over again, yet with much less friction.)

Plus, what other TV show has a catchphrase like "And by 'country', we mean a sovereign state that's a member of the UN in its own right"?
Posted by Craig at 18:50