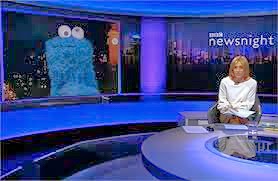 There's an interesting exchange at Biased BBC, in the light of Newsnight's appointment of the TUC's chief economist to be its new Economics Editor, which has got me thinking.

Here's that exchange in a nutshell:

Guest Who: Most people prefer to be totally unaware of what the politics of their bringers of information and education are because their professional efforts are objective. The BBC does however rather seem to fish from one, very limited, noisy pond, and seems content to reap what it flaunts.

Dunc: The point surely is not to employ someone who is objective, but that they are objective once employed? Otherwise you are ruling out anyone who’s worked in any political capacity, or for any newspaper….or maybe even any commercial operation. And of course, I’d presume you wouldn’t want the BBC just recruiting from within the BBC. What does that leave?

Demon: The BBC doesn’t recruit from just inside the BBC. It recruits from the Guardian, the Labour Party and other extreme left-wing groups. Of course they all share the same very narrow and bigoted world-view so it is effectively the same as recruiting from within the BBC.

All three have a point, but can we pin the issue down any more by looking at precisely who Newsnight has recruited?

Here's a breakdown of who's who at Newsnight at the moment, along with the date they joined the programme and where they were recruited from:

Of the six appointments to the programme over the past few years, two came from other terrestrial news organisations (ITN and Channel 4 News) while three of the others were recruited from left-leaning organisations (The Guardian and the TUC).

It's the three latter appointments (Allegra Stratton, Ian Katz and now, most spectacularly, Duncan Weldon) which have raised so many hackles...even if they all really do succeed in bringing bags of objectivity to their work. They just really does make it appear as if the BBC finds its almost impossible not to fish in that very limited, noisy pond.

Is it because he comes from the Financial Times, and the FT isn't so easy to pin down ideologically as the Guardian (despite the vociferous assertions to the contrary of some partisans on both sides of the political spectrum)? (It was generally pro-Labour throughout much of the 1990s and 2000s before coming out in support of the Conservatives in 2010. It remained staunchly pro-European throughout.)

It gets a little more complicated with Chris Cook, however, as he might reasonably be assumed to hold the sort of views you associate with the left of the Conservative Party, given his former role as an aide to David Willetts.

So it's not completely black-and-white after all then. It's merely mostly black-and-white, and the appointment of someone so firmly rooted in the world of the Labour Party as Duncan Weldon remains a dangerous gamble by Newsnight.

They are going to have to rely on him to try to be as objective as it's humanly possible to be if they aren't to get seriously burned by his appointment, because hordes of bloggers, newspaper reporters, and Tory MPs will be watching his every report, waiting for the left-wing bias to come pouring out of him.
Posted by Craig at 14:01