I don’t know whether Mishal Husain was trying to replicate the plaudits she received for the famous “Malala’ interview, aired on her debut appearance on Today. It seemed so to me.

Interestingly, a quick look at Twitter shows that many people agree that this time she got it wrong.
“Profoundly exploitative and intrusive” said Tim Walker.
“Unpleasant and exploitative” “Bring back Brian Redhead” said Eddie Arthur.
“Interviewer sounded cold and indifferent, was hard to listen to” said Soweto Kinch. 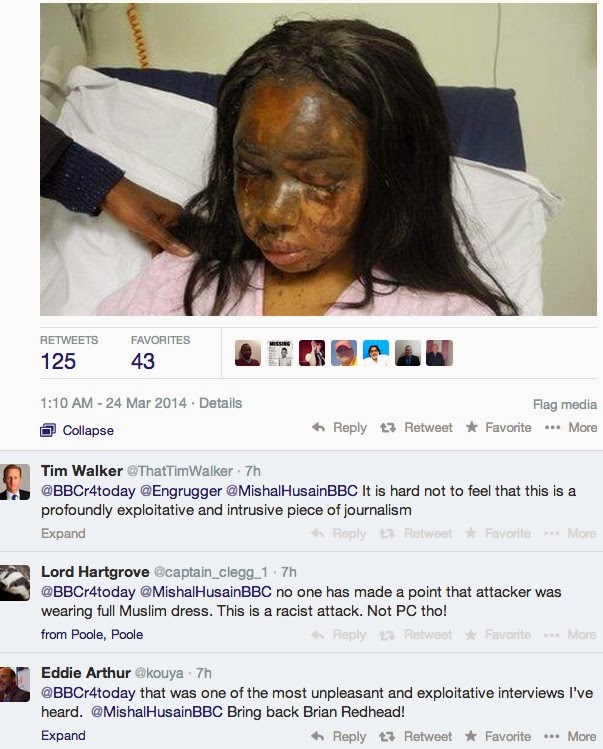 Apart from the fact that Mishal has a harsh voice, which sounds cold and indifferent most of the time, (unless she happens to be talking to Gil Hoffman, when it’s cold and supercilious) I have to say that despite the interview with Naomi Oni being excruciatingly long, ultimately it managed to confuse rather than clarify. We learned that Ms Oni was insensitively treated by the police, which was important to know, but I think we learned little about the relationship of victim and perpetrator till near the end, when I thought I heard Oni saying her former friend ‘was obsesscinated” with her.

Mishal announced that the perpetrator had been wearing “a Muslim veil” but it seemed she uttered “Muslim” almost surreptitiously, (or was I imagining this?) We did not get to hear how the police identified the burka-wearing lady, or why the police took their time to find  the CCTV footage.
I hope “Umbongo” won’t mind me reproducing some of his comment on this topic, which he posted on Biased-BBC.

[............ there was no respectable journalistic motive to bring on the victim here and reduce her to tears. On the contrary it’s an example of irresponsible “yellow” journalism which indulged the BBC’s contempt for and belief in the prurience of its audience. Moreover, by exploiting the understandable emotions of the victime, the item bypassed any disinterested consideration of Naomi’s accusations.I’m sure it comes as little surprise to anyone that the police can be – and apparently were on this occasion – insensitive in the way they pursued their investigations. However, the possibility that the acid attack was self-inflicted was one that any decent investigator would have considered (and swiftly dismissed). However, what shouldn’t be forgotten is that the then alleged perp was dressed in the costume of the Met’s favourite minority. I can quite believe that given the police team’s choice of explaining the acid attack as being either self-inflicted or perpetrated by a person of no appearance, the pressure would be on the investigators to opt for the former: the hassle of explaining away another apparently anti-kuffar crime would be too much to bear.Unsurprisingly, Mishal studiously avoided pursuing that line of explanation for the police’s initial scepticism concerning Naomi’s allegations. Rather, the implication that disbelieving Naomi was a subspecies of the effect of the police’s institutional racialism fits in far better with Mishal’s world-view and that of the BBC.’