Re: Some film the BBC likes 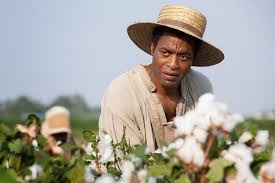 As each of the preceding posts has ploughed through today's bias-filled Broadcasting House, it's only right and proper to end the day by writing something about its final feature....

Yes, the BBC just won't shut up about it. They seem truly obsessed about it.

Can you guess what it is yet?

Can you guess what I'm talking about yet?

I coming to suspect (in my facetious but far from abstemious way) that most BBC employees probably have posters about 12 Years a Slave hanging on their walls and that there may even be shrines - yer actual incense-laden, Tibetan bell-ringing, multi-faith shrines - in umpteen BBC studios (and bedrooms) dedicated to the worship of director Steve McQueen (PBUH).

Broadcasting House reported from Louisiana about the film.

Some blacks talked about continuing racism. Some honkies talked 'bart how the issues raised by 12 Years a Slave are over 'n' done with, y'all. The BBC reporter responsible for the report declared herself disturbed and there were two 'talking heads' in the report with the surname 'White'. (Tee hee!). There were also sad songs, and psychic traumas, and "quote" 'n' "quote" things...

...and, to conclude, a pastor with slave-owning ancestors who thinks that his there was a "American Holocaust" (re slavery) and that Americans shouldn't be erecting monuments to the victims of Nazism when America itself was perpetrating "the same kind of racist evil".

Call me an enemy of moral equivalence, but there's really not much moral equivalence between what the slave-owning Americans did (truly wicked as it was) and what the Nazis did (in a league of evil entirely of its own) to the Jews, and for Broadcasting House to finish this report with that self-loathing, morally crazy thought suggests that Broadcasting House's own moral compass is very much askew.
Posted by Craig at 22:29