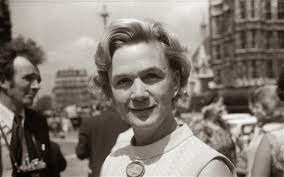 On a slightly personal note, I was reading the obituary in the Telegraph of the woman who served as Lancaster's MP for 27 years, Dame Elaine Kellett-Bowman.

When I went with school to the Houses of Parliament, it was Dame Elaine (a Conservative) who guided us round.

Born and educated in God's (real) own country, Lancashire, she did her wartime service as a land girl. She went to university with Margaret Thatcher. Her first husband was killed in a car crash. She herself suffered head injuries and memory loss but, remarkably, she took over the job of running his 149-acre farm whilst looking after her two children. She then trained to become a barrister (to keep her mind active), whilst still running her farm. She succeeded in becoming a barrister. She battled Robert Maxwell twice in elections. She finally gave up the farm and in 1970 seized Lancaster from Labour. She fell out with Edward Heath but remained deeply loyal to Mrs Thatcher. Her majorities (as I well recall) remained high until her retirement in 1997.

A remarkable woman then, as the Telegraph's obituary brings out. (She apparently did social work too.)

The Independent also has a powerful, generous take on a politician who most definitely wasn't their kind of politician - a strong moral conservative, as well as a right-wing Tory.

For a Lancashire lass, Dame Elaine had a distinctly un-Lancashire accent (if not manner), which I remember very well from my one encounter for her. She came across as posher than the Queen, accent-wise.

To quote the Telegraph:

In the Commons, she was at a disadvantage. Blessed with the speaking manner of a Valkyrie educated at St Trinian’s, the moment she rose to speak Labour members would break into a chorus of trilling that undermined whatever point she was trying to make.

I did wonder what the BBC would make of her passing but, unfortunately, they've not bothered to report her death on their website, and I very much doubt she's the sort of woman who'd appeal to the makers of Radio 4's Last Word either.