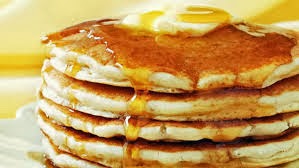 Right, that's the bacon and eggs taken care of. Now down to Sunday, and the pancakes.

The first dealt with the brutal mass stabbing at a railway station in south western China which has left at least 33 dead and over 130 injured. With depressing inevitability, it's looks as if Muslim terrorists are the perpetrators of this savagery and the Chinese are beginning to describe the attack as their 9/11.

Shelagh Fogarty talked to the BBC's Beijing correspondent Celia Hatton about it and, being the BBC, they concentrated on outlining the grievances of the the Uighur Muslims of north western China's Xinjiang province  - the way they resent having become an ethnic minority in an area they once dominated and the way (they claim) the Chinese government is suppressing their religion (banning them from wearing burqas, and the like). The adjective Celia used to describe the atrocity in Kunming was "well-coordinated".

Then it was onto Ukraine, specifically the ethnic make-up of Crimea.

Shelagh interviewed Roland Smith, former UK ambassador to Ukraine, and they began (being Sunday) by discussing the plight of the Muslim Tatar population there. Tatars, they said, were the dominant group in Crimea from the 13th Century onwards until Catherine the Great annexed the Crimean Khanate in 1783 and Russification began. At the end of the Second World War Stalin deported the Tatars en masse as many of them had actively collaborated with the Nazis during the war. The Tatars began returning to Crimea under Gorbachev's perestroika, and then came back in much larger numbers once the USSR collapsed. 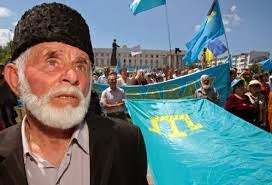 Looking into this a little further (as is my wont), there are now around 300,000 Tatars in Crimea, making up 3/5 of all the Muslims in Ukraine. (There are 500,000 Muslims in Ukraine out of a population of just under 46 million.)

Mr Smith said that the last thing they want is to be ruled by Moscow again and that they want to be in an independent Ukraine. He said that, though they are Sunni Muslims, radicalisation hasn't happened. Yet.

Mr Smith is very clearly on the Ukrainian nationalists' side rather than the Russians (and pro-Russian Ukrainians). He says Moscow is being "ridiculous" and thinks that ethnic Russians have been well-served by Ukraine, especially given that Crimea has been autonomous since Ukrainian independence. He says that Russians there haven't really felt oppressed. He predicts that Ukrainians speakers in Crimea, however, will soon "see the heavy fist of Russia".

After that unplanned foray into foreign affairs, Sunday returned to its scheduled itinerary, starting with apps:

Too busy for church? Not to worry because the Church of England have devised an app which allows you to pray on the move. Charles Carroll roadtests prayer app on the London Underground. But its not the only digital religious tool on the market. Wired magazine's Andy Robertson joins Shelagh to discuss the range of religious apps and how they work.

Apps, as the technologically-minded among you already know, are muscles in the abdomen which allow you to use computers, phones, treadmills, etc to perform particular functions, like playing video games. Long periods on the computer playing such games can lead you into obtaining what's known as a 'six pack' - or, if lager isn't your tipple, you can always reach for a bottle of wine instead.

The Church of England's new app is intended to help commuters observe morning and evening prayers with daily texts from the 1662 Book of Common Prayer. So, if you're alone on the London underground, you can you pop out your mobile phone and, lo, a prayer will wing its way to you at the click of a button.

Shelagh was keen to find out if other faiths have taken them up.

Then it was onto that perennial Sunday favourite - gay rights in Africa:

Uganda has passed an anti-gay bill which sentences people to life imprisonment for gay sex. Rahul Rao is an expert on the development of anti-gay feeling in Uganda and explains what role religion has played in the Bill. Scott Little is an American evangelical anti-gay activist who has advised the Ugandan government. He explains the rationale for his beliefs.

We heard first from Scott Little...er Scott Lively, in fact...a man of 'the Christian Right' who has indeed advised the Uganda government and who believes that aggressive Western gay rights activists have imposed their agenda on countries like Uganda and are undermining the traditional family in such countries. Even though he says that most of the new laws in Uganda are "too harsh", he supports their general thrust (so to speak). Shelagh heard him out without interruption, which is most unusual for a BBC interviewer when faced with interviewees who holds such opinions - though her tone of voice betrayed the fact that she was interviewing Mr Lively whilst metaphorically wearing surgical gloves and wielding a pair of lab tongs.

Her tone warmed perceptibly though when interviewing Dr Rao, who she interviewed as an expert. He argues, in complete contrast to Mr Lively, that it's conservative evangelical Christians like Scott Lively who are in fact imposing their Western agenda on places like Uganda, saying that there was never an issue about homosexuality in Uganda until 1997 when, in the run up to the Lambeth conference, conservatives, feeling they were losing the culture wars at home, reached out to Africa and began foisting their own concerns on countries like Uganda, raising a phenomenon called "anticipatory homophobia".

What's next? Well, Sunday's favourite Catholic bishop - the go-ahead Bishop of Arundel and Brighton - was back after a surprisingly long absence:

Bishop Kieran Conry is encouraging Catholics to return to the confessional in the lead up to Lent. But what role does confession play for Catholics in the 21st century? He joins Shelagh Fogerty [sic!] to explain.

Pope Francis has been encouraging Catholics to return to the confessional, and Bishop Kieran is echoing that call. He says the most confessions are face to face now, and the old cinema image of confession (the grill, the black box, the curtains) isn't an accurate one any more.

Shelagh based many of her questions on ultra-liberal Catholic writer John Cornwell's criticisms of the Church. (His book denouncing traditional Catholic confessions also formed the starting point for a recent Start the Week.) Bishop Kieran thinks that John Cornwell, who he admires, is exaggerating the downsides of confession, though he concedes his point that children under 12 shouldn't be encouraged to go to confession. For him, their is a joy in unburdening yourself and being told that you are forgiven. 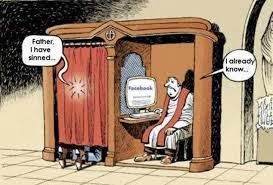 Plus he also likes Woman's Hour. (I suspected he would).

Next week is Shrove Tuesday - but what is the spiritual element of making pancakes? Sister Cathy Jones joins us in the studio to demonstrate.

Sr. Cathy and Shelagh Fogarty gave us a brief reminder of why we eat...mmm...pancakes and why Lent is still important as a time for reflection and abstinence.

Shelagh then ate one of the pancakes Sr. Cathy had prepared, speaking with her mouth full of food live on Radio 4!

The word 'Shrove' is the past tense of 'shrive', meaning either to hear (as a priest) the confession of, assign penance to, and absolve someone or to present oneself to a priest for confession, penance, and absolution. It comes from the Old English word scrīfan, meaning ‘impose as a penance’, and is of Germanic origin.

Of course, you're all doubtless well aware of why Christians fast during Lent because you were all taught RE at school. Correct?

Well, that was the subject of Sunday's closing segment:

In October last year OFSTED released a damning report on the state of Religious Education. This week the government have been accused of discriminating against the subject by failing to provide training bursaries for new teachers in the subject. Bob Walker investigates if RE is under threat.

Yes, government cuts and Michael Gove's Department of Education are under fire and here was Sunday reporting the complaints of four charities about those bursary cuts to trainee RE teachers. 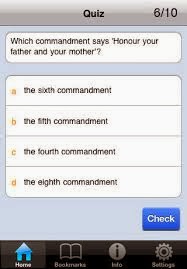 Bob Walker's report began with the story of a trainee teacher who is struggling without a bursary, adding an extra £13,000-worth of debts on top of her existing £20,000 student debts. She's struggling to afford food. The Head of RE at an academy in Nottinghamshire says RE is crucial and a non-specialist RE teacher at her school agreed with her. A spokesman for a pro-RE charity then attacked the Department of Education, saying there's no good reason for their actions. Bob put various counterpoints to him and read out a short quote from the government insisting that there's no problem with RE, but the man from the charity came straight back saying that the government's numbers are "misleading". Last years OFSTED reported on the state of RE in schools, and was highly critical of it. A pupil said RE's just as important as any other subject and that specialist teachers are needed, echoing her teacher. The pupils think it can improve community relations too, and went to parliament recently to tell such things to a parliamentary committee. So everyone in Bob Walker's report was in on this campaign.

Ah well, there was time for an interview with someone who would put the opposing point of view:

Mr Lloyd is a Lib Dem and far from putting the opposing point of view, he actually agreed with the campaigners, saying that RE is more important now than ever now because there's so much "misinformation" about other religions out there, especially  on the internet and in "certain newspapers" (hmm, wonder which religion he was talking about there?) and joining in their criticism of Michael Gove and the Department of Education, says it's a mistake & that Michael Gove said should change his mind. "This matters very deeply to you, doesn't it?", Shelagh asked him. Yes, it does, he replied.

All sounds very biased, doesn't it?

Ah but, the government were invited onto Sunday to respond to the criticisms of the campaigners. Shelagh said they'd declined to put anyone up though, so she read out a short statement from them and then invited Mr Lloyd to respond to it (which he did by disagreeing with it).

My response there is to wonder why, knowing for a few days that they were going to cover this story, Sunday didn't make more effort to find someone - anyone - to represent the other side of the argument (the side that thinks that RE may be important but thinks in this time of austerity that there are more urgent priorities for government funding, such as Business Studies perhaps). Why didn't they have a 'contingency plan' guest at hand to make that case just in case the government was unwilling to put up a spokesman?

Well, that's this week's Sunday disposed of. Sunday, a BBC programme named after the day of the Christian Sabbath.

Old English sabat "Saturday as a day of rest," as observed by the Jews, from Latin sabbatum, from Greek sabbaton, from Hebrew shabbath, properly "day of rest," from shabath "he rested." Spelling with -th attested from late 14c., not widespread until 16c.

The Babylonians regarded seventh days as unlucky, and avoided certain activities then; the Jewish observance might have begun as a similar custom. Among European Christians, from the seventh day of the week it began to be applied early 15c. to the first day (Sunday), "though no definite law, either divine or ecclesiastical, directed the change", but elaborate justifications have been made. The change was driven by Christians' celebration of the Lord's resurrection on the first day of the week, a change completed during the Reformation.