Not all my precious time is spent blogging. I have parallel obligations; domestic servant, business partner, confidante to random strangers (dunno why) and a lot lot more. Ugh! I hate “lot lot.” I threw it in to see if you were listening.

Some of my time, and yours I bet, is spent looking for things in and around the home. My specialism is the vital message written on a piece of paper. Everything in the vicinity has to be sifted through and no paper must be left unturned. If whatever-it-is does turn up at the end of a hard day’s goose-chase, it infuriatingly reveals itself not to have been on a piece of paper at all, but on a greasy old brown envelope or a torn off bit of newspaper. Or a scrap of wood.
This time can never be reclaimed. What’s the moral?

Blogging also means reading, and I limit that to one or two core websites like Harry’s Place, the Spectator and the iPlayer.

Harry’s Place has the most interesting btl comments and the articles often address subjects I like. I’m a mere infant compared to many of these commenters, you’ve noticed.

Why am I telling you this? Oh yes, I’m telling you because I first heard about the  Newsnight debacle on an H/P thread. The article was titled: “Who Speaks for British Muslims? Reflections on Newsnight”   with the sub heading: some perspectives on the recent  Newsnight debate.

The Harry’s Place discussion veered off at a many faceted tangent and developed into a fascinating thread about Islam in general.  Disqus’s nesting system is helpful in that a ‘reply’ states which poster it’s addressing, but it throws the chronology out the window. If you happen to come upon the thread, say, a few days late, there’s a continuity problem, which is hard to unpick.

The so-called Newsnight ‘debate’ was also alluded to by Craig here. Debate it was not, but I thought it sounded like a spectacle one ought to watch. So I looked at it on iPlayer.

It was in fact a free-for-all involving the three most irritating male media-Muslims, whose individual incoherences merged into one unintelligible incoherence with Jeremy Paxman smirking in the background.
The item was introduced with a short film by Maajid Nawaz. It featured an excessive amount of smoking on hookas. 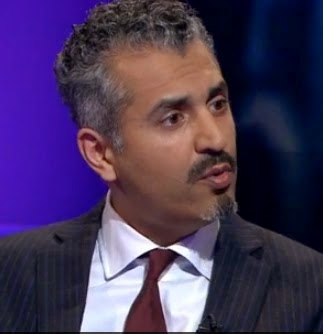 Nawaz, Hasan and Ansar are notoriously verbose and apt to prefer the sound of their own voices to those of other people, but obviously the chaos wasn’t predictable enough for Jeremy Paxman, as he saw fit to exacerbate things with a provocative remark about Nawaz’s famous Jesus and Mo cartoon T shirt Tweet. This scuppered any hope of finding an answer to the original question:  “What is a spokesman for the Muslim community? What does it mean, how do you get the job?” 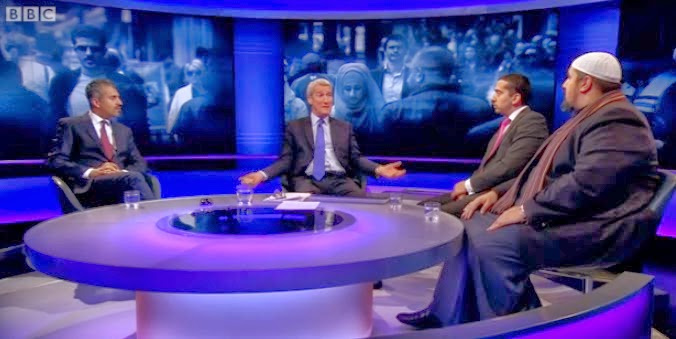 Nawaz presents himself as a reformer. Actually he seems just as much of a self publicist as the other two, who also present themselves a reformers, of a slightly different, equally unconvincing strain. At the end of the day it’s the same old same old.

These gentlemen are never off our screens. My perfect unbiased BBC day would have to be Maajid/Mehdi/Mo-free, and it would also have to have at least one Woman’s Hour without a discussion about the veil or any other topic that starts from the premise that Muslim values are universally accepted, and/or of interest to  all and sundry. The unfortunate assumption that this is the case has crept by stealth into much of the BBC’s output. As Shirley Conran said ‘Life’s too short to stuff a Muslim.

I always find vital messages in the end. Usually under some papers on one of the surfaces I mentioned, or on the back of an old exercise book. It’s very satisfying.  Happy Mother’s day to me.