By the Bonnie, Bonnie banks of the BBC 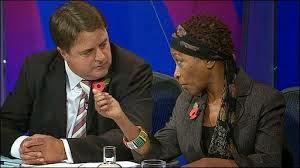 It speaks volumes, I think, that Bonnie Greer was invited to give the first of this year's Lent Talks on Radio 4.

That the BBC would choose someone like Bonnie Greer - a left-leaning, arts-orientated writer - to open this year's series is hardly surprising. (Even Feedback's Roger Bolton would have to admit that.)

In fact, I'd go so far as to describe her as an entirely 'predictable choice' for the left-leaning, arts-orientated BBC.

BTW, "left-leaning" and "arts-orientated" is certainly how I tend to think of Bonnie Greer. She, however, seems to think of herself, first and foremost, as "black".

What is it with some people and race? Bonnie Greer is absolutely obsessed by it. (Maybe Radio 4's More or Less should carry out a statistical analysis to settle the question, 'Who bangs on more about race, Bonnie Greer or Nick Griffin of the BNP?' The sharp money's surely on Bonnie.)

I will admit though, before listening, that I hoped that Bonnie might just move beyond her comfort zone (in a series called Lent Talks), and talk about something other than race for once.

I should have known better.

Still, eventually, the religious stuff appeared and, yes, Jesus was a street fighter, a rabble-rouser, sticking it to The Power - Rome - and behaving exactly like a character in '12 Years a Slave'.

Yep, it was the usual Bonnie Greer stuff, sadly. We've heard it from her so often before on the BBC, ...so, so often...so much so that, despite its moments of heightened language, it sounds over-familiar, faded, cliched and dull. (No offence.)

Five more episodes of this series of Lent Talks remain. Let's see if the BBC can escape its own comfort zone over the course of the remaining episodes, and give us something fresh and inspiring instead.
Posted by Craig at 23:04