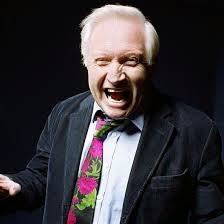 The other thing I missed out on this week was the latest right-wing assault on BBC One's Question Time.

As regular readers will know, Question Time both fascinates and repels the two of us here at Is the BBC biased?, and we've posted umpteen posts about it, wrapping ourselves up (or, to be fair to Sue, wrapping myself up) in all manner of Gordian knots over it.

My main concern remains the left-wing-activist-hijacked audiences (a very real issue, even if you accept that the BBC tries to be 'representative'), but...

...both Breitbart London and the Daily Mail have been making hay this week with a 'leak' of David Dimbleby's briefing notes, demonstrating that 'Mr Impartiality' was primed (last week) by the programme's producers to ask five relatively tough questions of a long-retired Tory politician, Lord Heseltine, whilst being merely tasked with asking two relatively easy questions to put to presently-active Labour politician Rachel Reevezzzs (as Ian Katz might describe her).

David Dimbleby (PBUH) was briefed with the following questions for long-retired Tory, Hezza:

...(questions clearly designed to embarrass the Tories at every stage)...

...while he was merely primed to ask Labour's Mzzzzzz Reeves a mere two questions, both soft (in comparison):
That certainly smells of bias, doesn't it?

And BBC critics are fond of pointing out that Question Time editor Nicolai Gentchev is a (former) communist.

...there have been so many blogposts right across the British blogosphere banging on about about the bias of a particular BBC programme, and yet no one can quite nail it.

If the bias really is so clear (and so clear that  it would embarrass the BBC), how would you nail it? (I've tried before).

Yes, Question Time may only attract an audience of just two million people (out of some 63 million in the UK), but its influence is considered significant (why? by whom?) and (apparently) it shouldn't be dismissed.

If we're not going to dismiss it, what can be do about it? How can it be made less biased?

I'm genuinely open to suggestions here.
Posted by Craig at 23:05