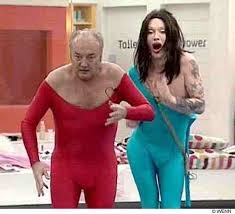 I know it's a bad, bad  thing to bust the Times's paywall, but I feel the need to share part of Danny Finkelstein's latest article with you (as it's excellent), even though it's got absolutely nothing to do with BBC bias.

I just want to say how much there is to admire about George Galloway. It is true that we haven’t always seen eye to eye. However, it is impossible to avoid the many things about him that are genuinely impressive.
He takes a keen interest in the Jewish people. He is well travelled, making his presence felt in some of the most dangerous places in the world ruled by some of the worst dictators. He has made friends with people who are otherwise friendless. He has a tremendous vocabulary, deploying words such as “indefatigability”. He has been a doughty supporter of Sharia.
He has been one of the finest MPs ever to dress in a bright red leotard and pretend to be a cat. He is a prodigious litigant. He has been an entertaining host of Iranian state-sponsored television programmes.
I am sure there are other things, and I will keep thinking. You see this week I’ve been struggling with the same problem as Matthew Parris — what to say when someone you disapprove of dies. How do you avoid looking either insensitive or a hypocrite?
I’ve decided the best way is to start saying nice things about such people while they are still alive.
I thought I’d begin with the hardest case. How did I do?