Jeremy Bowen has written a new book “The Arab Uprising” Not only that, but he has received an award:  News Television Journalist of the Year

[Jeremy] is among the best known foreign correspondents on British TV and the judges called his entry a "masterclass in TV journalism." Even when injured by shotgun pellets he continued to report the events around him. What particularly impressed the judges was his ability to provide context and analysis from within fastmoving events on the ground.”

Even when injured by shotgun pellets he soldiered bravely on which gave us the opportunity to use our Bowen-in-a-Bandage images a few more times than was strictly necessary. 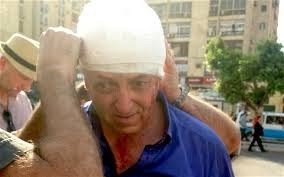 I’ll look forward to hearing him plugging his book. Meanwhile, back at the Independent, he’s been chatting to Ian Burrell and he’s still miffed about the BBC’s soft reprimand five years ago, at the time when some complaints against him were partially upheld by the BBC Trust.

He is still smarting from a controversial BBC Trust finding against him in 2009, which outraged journalists both inside and outside the BBC. He maintains that the ruling – relating to the sourcing of part of a story on Israeli settlements, following complaints by two full-time pro-Israeli lobbyists – was a “mistake” based on a “flawed” investigation process that has now been changed. “One person they took advice from who was held up as independent was later appointed as Israel’s ambassador to the United States,” he complains. The BBC Trust continues to defend its findings. 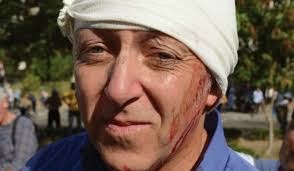 “The BBC Trust said it had received two complaints claiming that a June 2007 website report, headlined "How 1967 defined the Middle East", in which Bowen described the legacy of the 1967 Arab-Israeli war, contained inaccuracies and was biased against Israel.
One complaint about this online report was partially upheld by the BBC Trust on the grounds of both accuracy and impartiality, ruling that Bowen should have used clearer language and been more precise in some aspects of the piece. The trust also said Bowen's reference to Zionism's "innate instinct to push out the frontier" had been unqualified and that his statement that Israel was "in defiance of everyone's interpretation of international law except its own" had been imprecise and should have been picked up by BBC Online's editorial processes.
On the issue of impartiality, the trust said that Bowen "should have done more to explain that there were alternative views on the subject which had some weight" and that "readers might come away from the article thinking that the interpretation offered was the only sensible view of the war".
The BBC Trust upheld the second complaint with regard to impartiality and partially upheld it with regard to accuracy on a number of the same grounds and also on the basis that Bowen's statement that "the Israeli generals … had been training to finish the unfinished business of Israel's independence war of 1948 for most of their careers" had been imprecise.”

Not sure how he could substantiate his accusations that the reprimand was a “mistake” based on a “flawed” investigation process, I suppose he meant he didn’t like it because the complainant was pro-Israel and one of the advisors was an ‘American’ who was not ‘impartial’. These pesky pro-Israel types happen to be the sort of people who would complain, and who would know exactly what there is to complain about. So tough shit.
I think most pro-Israel types can safely say they know the feeling, because obviously we face precisely that in reverse on, as they say, ‘a daily basis’.
It does seem somewhat churlish of Bowen to bear such a grudge, and it makes him look like a habitual bearer of grudges, if there’s any truth in the rumours that he’s never been able to forget that the Israelis killed his Arab driver.  He is after all, supposed to be a professional, grown-up, senior journalist, not a petulant infant. Grudges are not ideal baggage for an impartial BBC reporter to carry.
Jonathan Dimbleby waded in at the time, too. These Guardian reports have been sanitised and spun by the BBC/Guardian laundering service, but they nevertheless had to admit Bowen had boobed.

No doubt his book will be popular. Tricky subject, the Arab Spring Uprising.
Posted by sue at 17:08