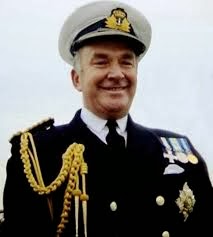 I thought Paddy O'Connell's first guest on Broadcasting House today, Lord West, spoke a good deal of sense about the growing crisis in Ukraine, saying that some people - and William Hague and Barack Obama were the two people he called out by name - are making "silly" statements about it, and that Obama's latest intervention is precisely the wrong kind of intervention, inflaming the situation rather than calming it down.

My concerns lie (as ever) with Paddy (as this is a blog about BBC bias).

Paddy introduced him first as "the former head of the Navy, Lord West" and then with  the words, "Lord West fought the Falklands War. His ship was sunk beneath him" before going on later to ask him this question:

Well, yes, but - especially given his criticism of William Hague - it might have been prudent on Paddy's part to point out that Lord West is a politician. He was a Home Office minister under Gordon Brown and sits on the Labour benches of the House of Lords. So Lord West is both a military person and a politician. Surely Paddy couldn't have been unaware of that? Why didn't he say it?

Anyhow, it was only last Sunday that I was moaning about Paddy doing his "Bliss is it this dawn to be alive, But to be a middle-aged BBC presenter is very heaven!" thing about the Ukrainian 'revolution'.

And here he was again today, waxing wildly simplistic again - and betraying at least two biases in one sentence:

Well, absolutely, but of course the president actually won a democratic election, so these things get very muddied. This is very muddy water, and we need to be quite careful shouting 'Democracy!'

Indeed. Ousted president Viktor Yanukovych won the runoff election in 2010 with 48.95% of the vote compared with 45.47% for Yulia Tymoshenko. Yanukovych may have become increasingly authoritarian, corrupt and - in the end - brutal, but no one has voted the new Ukrainian government into power yet. They seized power without waiting for elections due next year.