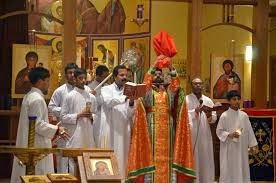 After Sunday and the Radio 4 Appeal - Mariella Frostrup appealing on behalf of the BBC's Sports Relief - came Sunday Worship (8.05am).

I'm entirely with Chrish (in the comments) in describing this Syrian Orthodox Service as powerful, and full of interesting information. I also thought the call to prayer/extemporising of Christian song at the end of communion was stunning, and enjoyed the hymns in in Arabic and Aramaic. The weaving of voices - including the head of the Syrian Orthodox Church in Britain, the kidnapped/very probably murdered Archbishop of Aleppo [a "dear friend" of the presenter Martin Palmer], the Grand Mufti of Syria [whose own son was assassinated by terrorists], and our very own Prince Charles - was well wrought, and the nature of the persecution faced by Christians in the countries surrounding Israel has rarely been so forcefully conveyed on the BBC before.

The essential message was (courtesy of Ephesians 4):

Be ye angry, but sin not. Let not the sun go down upon your wrath, yet do not make room for the devil. Let all bitterness, and wrath, and anger, and clamour, and evil speaking, be put away from you, together with all malice: And be ye kind one to another, tenderhearted, forgiving one another, even as God for Christ's sake hath forgiven you.

Why should a Christian act of service find its place in a post describing an unbiased day at the BBC? Isn't it biased in favour of Christianity and, therefore, against non-Christian religions and atheists?

To which the obvious reply is that the vast majority of Radio 4's output is secular (despite Thought for the Day each day), so a small space for a weekly Christian service in a country that many listeners (like me) still think of as a Judeo-Christian country is surely acceptable to all but the most intransigent atheist.

I think it's wonderful that Radio 4 broadcasts a weekly Christian Sunday service. So that's going into my idea of a good, unbiased day of BBC broadcasting. 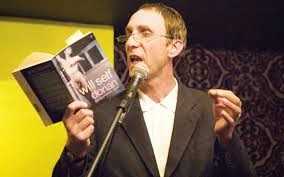 A Point of View (8.45am) might also have a place - as short, intelligent 'think pieces' are perfect for radio.

Regular readers of Is the BBC biased? will, however, be well aware of that list...the one that proved the programme's left-liberal bias in the clearest terms possible: A Point of View went nearly four years without a single right-of-centre presenter. There were plenty of left-leaning ones of course). Only when Roger Scruton came along did that very long, bias-provoked drought finally come to an end.

Since then (August 2013), Roger Scruton has re-appeared but remains the only right-winger in the A Point of View village, with additional left-leaning speakers adding to that list (William Dalrymple, AL Kennedy) to reinforce the programme's overwhelming left-liberal bias.

So for A Point of View to take its place in my 'perfect day' of BBC broadcasting, it would have to very radically address its own failings when it comes to providing a proper range of points of views appropriate to an 'impartial' broadcaster...and that obviously means not just inviting Roger Scruton into the studio for a short run every eight months.

Variety should be the spice of BBC life. A dozen blossoming flowers from the left, a dozen from the right, a dozen from nowhere-easily-identifiable - that would do nicely, wouldn't it?

So, having (in my imagination) listened to Will Self's fourth A Point of View the week before, my imaginary perfect BBC day would have me waking up to the start of a run of talks from Theodore Dalrymple. Imagine that at the BBC! (Hard, isn't it?)


And, yes, Tweet of the Day would definitely be there, representing natural history - regardless of the voting habits of its presenter (if that presenter keeps those political beliefs out of her/her talk about the sand martin, goldeneye, house sparrow, lesser-spotted oddie and rook. Tweet of the Day is a fabulous series. (Should have mentioned that earlier perhaps). 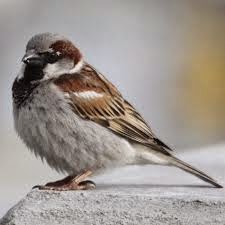 Ah, but could Paddy O'Connell and Broadcasting House (9.00am) ever find a place in my idea of a good, unbiased day of BBC broadcasting? Surely not?

Oh, I certainly used to have a right go at Broadcasting House for bias on a very regular basis, especially in 2009-10 (when I used to call it Gordcasting House on the strength of Paddy's apparent pro-Labour proclivities), then at Biased BBC [in very regular comments] and, yes, we at Is the BBC biased? are still at it [not quite so very regularly], making the case that there's still a problem with bias at BH....

...but, speak it softly, I've come round to the view that the programme isn't as bad as it used to be and - above anything else on Sunday 23 March - this particular edition of the programme spurred me into making a PARTIAL defence of that day's BBC broadcasting on an earlier post as....speak it very softly....I thought it was absolutely superb - and I didn't smell even the faintest whiff of bias from it either. No, not even from Paddy.

There was Professor Mark Almond on Russia (fascinating, unexpected), The Sky of Night's Maggie Aderin-Pocock judging Lord West, Dame Ann Leslie and Nigel Havers's explanations of the discovery of gravitational waves (funny), that fine piece on the youth orchestra of Afghanistan (inspiring, worrying), an interview about Magna Carta (informative), and an entertaining paper review featuring a Labour baroness, a Conservative lord and Maggie Aderin-Pocock (balanced). Plus Paddy kept his opinions to himself, and made me laugh on several occasions too.

From BH, I learned that there are four existing copies of the Magna Carta - two in the British Library, one in Lincoln and one in Salisbury. All four will be gathered together for the very first time next year to mark the anniversary.

The copy Paddy looked at was, as he put it, about the size of a tabloid newspaper - if entirely spread out. The Latin writing is brown, and feint on brown paper, using a very compact script. The medieval scribes, the lady from the British Library told us, used many abbreviated words to save space and there are two-and-a-half thousand words crammed into a single sheet of parchment. 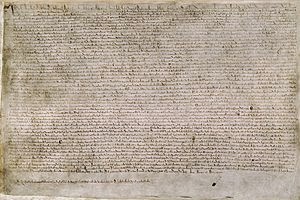 There were 63 clauses in Magna Carta. Only three of them are still valid in law today: the very first one, protecting the rights and liberties of the English Church; the one that protects the rights and liberties of the City of London, and other towns, ports and boroughs; and - buried away in the middle, without any prominence - the most famous clause of all, the one that says that no free man shall be seized or imprisoned, or stripped of his rights or possessions, or outlawed or exiled, except by the judgement of his equals or by the law of the land, and no one shall justice delayed or denied to him.

That's what I learned from this particular edition of Broadcasting House. It's the sort of thing that my idea of an unbiased day of BBC broadcasting would (and should) provide - along with the rest of the features of this present edition.


Hopefully, even though I'm using just one day of BBC Radio 4 broadcasting as an example, you're getting a very strong sense of what I want from the BBC - and what I don't want. More tomorrow.
Posted by Craig at 22:15

Labels: 'A Point of View', 'Broadcasting House', 'Sunday Worship', 'Tweet of the Day'