In the Psychiatrist's Chair 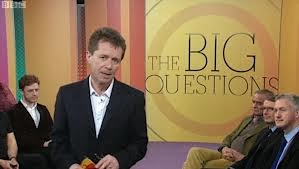 As Sue has mentioned before, I've got a real phobia about watching BBC One's The Big Questions.

Even the mere thought of watching the thing results in unsteadiness, dizziness and lightheadedness, as well as nausea, sweating, heart palpitations, shortness of breath, trembling and an upset stomach.

Still, after years of counselling, I've finally felt strong enough emotionally to force myself to watch the closing segment of this week's edition.

All that counselling helped me to see that I was conjuring up nothing but morbid fantasies about the programme.

It could be watched, and I could survive the experience.

During my sessions, I was asked to imagine a purely hypothetical edition of The Big Questions - an edition which would focus on the kinds of question that interest me.

My psychiatrist [who bears an uncanny resemblance to Tracey Ullman] asked me to think of a specific 'big question' and, after days of thought, I came up with: "Are Bible stories the way to teach morality?"

That's the sort of topic I love hearing discussed.

She then asked me to confront my fears and spell out my nightmare vision - my worst fears about what such an edition of The Big Questions would actually be like.

Heart pounding, sweat trickling down my brow, I began......

I said I thought such a programme might begin with some middle-aged Christian man who believes literally in Biblical accounts of, say, the Flood and Noah's Ark.

I imagined him being mocked by Nicky Campbell.

My imagination running wild, I even imagined the poor man being made to pick up a puppet of Jesus and stick his hand up it, live on national TV.

I also imagined him being laughed at by the studio audience.

Just prior to my main counselling session, I'd been reading Sue's posts about the Jesus and Mo t-shirt scandal, provoked by The Big Questions's refusal to show a close-up of a harmless, Mohammed-lookalike-depicting cartoon [for fear of offending the most easily offended people on the planet.]

So - probably as a result of that - my nightmare vision invented the image of Nicky Campbell quipping, in response to that puppet of Jesus, "If you've got puppets of any other prophets, could you kindly not show them!" - as if the Maajid Nawaz affair (complete with its death threats against Maajid) was little more than a joke, and (even more) as if NOT showing them [and NOT offending the most easily offended people on the planet] remains the right-and-proper thing for the BBC to do, in spite of Maajid Nawaz's bravery. [It's surely coming to something when someone tweeting a picture of someone else wearing a t-shirt is felt to be 'brave', isn't it?]

My psychiatrist said that this was good, specific stuff and asked me to imagine what might happen next in my irrational, hypothetical, nightmare vision of The Big Questions.

I replied that Nicky Campbell would probably turn to Andrew Copson of the British Humanist Society.

My psychiatrist exclaimed that this was a surprisingly specific answer, to which I replied [slightly exaggerating] that the BBC always (without fail) turns to someone from the British Humanist Society at this point in any such programme - and that it's usually Andrew.

"In such a programme," she asked at this point, "do you see Nicky Campbell mocking Andrew Copson in the way he mocked the conservative Christian, or not?"

"No," I replied. "I see Nicky being much less cruel to Andrew Copson".

"OK. Are you imagining a studio audience here?", she asked, "and - if so - how do you imagine them?"

"I imagine them laughing and clapping at every snarky remark about Christian belief," I  replied.

"OK. And you described the way Nicky Campbell treated one guest - the 'conservative Christian type', as you called him - in (as you saw it) a different, more harsh way to the way Nicky treated Andrew Copson", she said. "Would you see Nicky Campbell continuing to behave like that as the discussion went on?"

"Yes", I replied. "I would. And I think his biases would lead him to ask loads more questions snarking away at Bible stories rather than asking a balanced set of questions...er...except, perhaps, if some atheist type 'dissed' the 'camel passing through the eye of a needle' or The Sermon on the Mount or 'do unto others', or something nice like that".

"You keep using the word 'snarking'. Why?"

"Yes," I said. "I mean it in contrast to thoughtful, intelligent, generous questioning".

"Have you considered that snarky, confrontational questions might be a good way of provoking interesting answers, and that BBC One debates aren't like those on Radio 4, and that they need spicing up, need lots of heat, to keep up ratings?", she asked.

"Well, yes, I can see some truth in both those points," I replied, sipping on a cup of tea, feeling faintly abashed.

"Is there anyone else you feel the BBC would 'inevitably' - as you put it - invite onto this programme...in your nightmarish, worst-case-scenario vision of The Big Questions?", came my Tracey Ullman-lookalike psychiatrist's next question.

"There'd have to a loud-mouthed Muslim or some proudly ethnic black man to tick the BBC's diversity box...",  I began

"And there'd have to be a BBC Thought for the Day-type liberal Anglican, for sure," came my reply. "Someone like Christina Rees. It's usually Christina Rees". (Alas, she'd never heard of Christina Rees.) "She always say lots of trendy, lefty, middle-of-the-road Anglican things. The sort of things that even secular, doubting BBC Thomases [like Nicky] don't mind..."

"And how do you see Nicky Campbell treating her?"

"Well," I said, "by saying things like 'yeah' or 'Wonderful!' to her every pious, liberal bromide".

(I will admit that I was starting to feel sick at the mere thought of it here.)

"Now, Craig, please relax. Please breathe...Imagine an animal. What animal does this hypothetical edition of The Big Questions make you think of? Just take your time", she said.

I didn't take any time whatsoever to reply. I said, "A bear...as in a bearpit...Oh, and a lion, as in the Christians being thrown into the lion's den....Or cocks, as in cock-fighting, with everyone shouting at each other, and jeering, and applauding wildly when liberal voices say something liberal - especially if they're an ethnic minority member of the audience".

I became lightheaded at the thought of all this, and paused to take several further deep breaths.

"But, from what you've told me before in our previous sessions," she then asked, "you're an atheist too who is likely to share many of the views of Andrew Copson. So why does the ill-treatment of 'conservative Christians', fundamentalists, bother you so much?"

"Well," I replied, "I respect their views even if I don't share them and I don't like to see BBC presenters holding them up to ridicule, and coming back to them, again and again, and badgering them relentlessly, in a way that smacks of bullying. (As the Golden Rule in the Bible says, 'Do unto others as you would have them do unto you.') Even if the man being bullied holds absurd, fundamentalist views, it still feels deeply wrong to me to publicly hold him up to contempt - especially if he's a sincere, essentially decent and perfectly harmless man who [and, evidently, certainly not the kind of man to strap bombs round himself and blow himself up (for his faith's sake) on a crowded bus, or on an underground train] just happens to hold deeply unfashionable views. There's something truly unpleasant about seeing such a person placed (metaphorically-speaking) in the stocks by a BBC presenter on live TV. Don't you agree?"

My psychiatrist replied that it's not her role to offer an opinion, and that she's as impartial as a BBC reporter...

...at which point, I'm afraid, I leaped off her couch in disgust, thanked her for her time, and left her office in a huff, determined never to return again.

Instead, feeling myself in a much better place for having talked things though, I decided I'd confront my fears head on and watch part of this Sunday's The Big Questions. I felt strong, and that my nightmare fantasies about The Big Questions must be just that - pure fantasies.

I breathed hard, and couldn't bring myself to do it for the first forty minutes.

Finally, I switched on, twenty minutes before the end, and - to my utter astonishment - found they were about to discuss the big question, "Are Bible stories the way to teach morality?" (What are the chances of that happening?)

My astonishment turned to sheer horror as the debate proceeded exactly as my nightmare vision had envisioned.

My head spun. My world toppled around me. 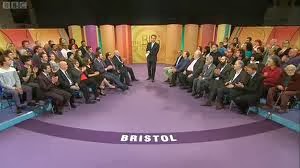 It was far scarier than Carrie or The Exorcist.

Flames began rising around my TV set, Nicky Campbell's head twisted 360 degrees around, and the hands of Jimmy Savile thrust themselves up through the studio floor before my very eyes.

I'm now back to square one, locked in a darkened room, shivering, traumatised to the very core of my being, determined never again to watch The Big Questions.