So what were the stories Newsnight chose to cover last week?

Wednesday 5/3
1. BBC Three going off air: "Will it be missed from our televisions? What happens to home-grown comedy now?" Interview with Tessa Jowell (Labour), comedy producer Ash Atalla & David Elstein, former chief executive of Channel 5.
2. Downing Street's 'suppression' of an immigration report.
3. Police top-and search reforms: Why are they talking so long? Is it because of 'regressive attitudes' at Number 10? Interview with Bernard Hogan-Howe, commissioner, Metropolitan Police.
4. What did the Bank of England know about market manipulation in the City? Interview with Dr Pippa Malmgren, founder of the DPRM Group.
5. Internet giants (like Facebook and Google) aim to connect the world by using drones. 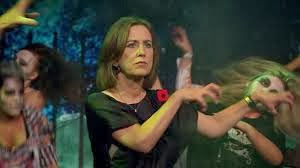 Well, there were lots of 'trouble for Downing Street' stories this week, weren't there?

Including, of course, that now-notorious immigration report (which rumbled on over three days).

There was also (inevitably) a good deal about Ukraine (and Russia).

The discussion about Vladimir Putin between Timothy Snyder and Anne Applebaum was a discussion between two strong critics of Putin, and it raised (for me) an interesting question: Is it right to mention who a well-known journalist is married to if it could be germane to the debate?Anne Applebaum is married to the Polish foreign minister, Radosław Sikorski, and he has been at the forefront of the news at the moment pushing for a stronger line against Russia. At no time on Newsnight was Anne Applebaum's relationship to this man at (or very close to) the centre of the story she was discussing. Should it have been? Or is it irrelevant?

Stories about alleged police malfeasance are cropping up quite often on Newsnight at the moment...

...almost as much as features attacking Benefits Street!

Who would have expected Newsnight to give over a full two-thirds of Thursday night's show to Stephen Lawrence? Well, probably anyone who knows the BBC, that's who!

Talking of obsessions, Newsnight's evident obsession with technology (in contrast to science) continues unabated, with more Facebooky wook stuff this week (and there would have been more if that Bitcoin interview had come about).

These answer one of Charles Moore's now legendary questions for assessing bias, 'What's the story?'. His parallel question was, 'Who's in the dock?'

Most of those are popular targets for the Left. So does that suggest left-wing bias on Newsnight's part to you?
Posted by Craig at 10:12