Nigel in the Lions' Den 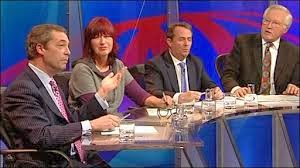 Managers at the BBC (at the instigation of senior BBC management) have passed a decree that Nigel Fagage is to debate Nick Clegg on the BBC, with David Dimblebly presiding, in the run-up to this years's Euro elections.

In the first year of the reign of Tony Hall, Director-General of the BBC, came Nickuchadnezzar, Deputy Prime Minister, prince of the eunuchs, unto the BBC, and besieged it.

It pleased Tony Hall to set over the BBC James Harding.

Now God had brought Nigel Farage into favour and tender love with the voters of the United Kingdom, and the prince of the eunuchs said unto Nigel, I fear thy popularity: then shall ye make me endanger my head with the electorate.

Then this Nigel was preferred (by the public) above the Liberal Democrats, because an excellent spirit was in him.

Then the presidents and princes of the BBC and the political establishment sought to find occasion against Nigel concerning the kingdom; but they could find none occasion nor fault; forasmuch as he was faithful, neither was there any error or fault found in him - though Godfrey Bloom, and some obscure UKIP councillors, were found against him.

Then these presidents and princes assembled together to James Harding, and said thus unto him, 'Tony Hall, live for ever.'

All the presidents of the BBC and the political establishment consulted together to establish a BBC statute, and to make a firm decree, that whosoever shall cast doubt upon the European Union and look most likely to win this year's European elections, he shall be cast into the den of lions, with a selected BBC audience, and David Dimbleby presiding.

Now, O James Harding, establish the decree, and sign the writing, that it be not changed, according to the editorial guidelines of the BBC, which altereth not.

Wherefore James Harding signed the writing and the decree.

Now when Nigel knew that the writing was signed, he went unto his party headquarters; and his windows being open in his chamber toward Salford, he kneeled upon his knees three times a day, and prayed, and gave thanks before his God, as he did aforetime.

The day came, and a stone was brought, and laid upon the mouth of the den; and Tony Hall sealed it with his own signet, and with the signet of the BBC Trust, that the purpose might not be changed concerning Nigel.

Then James Harding rose very early in the morning, and went in haste unto the den of lions.

And when he came to the den, he cried with a delighted voice.

Nigel was torn limb from limb by the lions, the carefully-selected BBC audience, and David Dimbleby.

For Nickuchadnezzar, though smitten almost to death by the power of Nigel's arguments, had called forth the lions in his hour of need, and they did hasten unto him.

And the children of God did wail and gnash their teeth, crying unto the Lord, 'Why oh why didst thou let Nigel go into the lion's den? Why didst thou leave him at the mercy of our enemy, the BBC?'
Posted by Craig at 18:29