It was a neat twist that the presenter who was chosen to host the item about BBC 3‘s censorship of the gay/Muslim debate was Mishal Husain the ‘Asian’ rather than Evan Davis the ‘Gay’.

The internet has been speculating as to whether ‘Muslim’ trumps ‘gay’ in the BBC’s hierarchy of specially protected minorities. It seems Muslim does trump gay, which is odd when you take into consideration the relative preponderance of BBC employees in each category. But I guess gays haven’t go so much leverage or something.

Mishal spoke to Dr. Naseem with a gently probing tone. Compared to the infamous hostility with which she attacked Gil Hoffman with that tedious Jeremy Paxman technique - i.e. repeatedly trying to squeeze out a supposedly self-incriminating answer to a when-did-you-stop-beating-your-wife question, with a revealing says-it-all smirk on her face, it was as chalk is to cheese.  We won’t know what her face was doing this morning, as this was radio, but let’s imagine a tender expression, like the way one might look at a dear little kitten who has just had an accident on the carpet.

The fact that this was considered to be a topic worthy of discussion on the Today programme is something I suppose. However, it was a smoke and mirrors type of pretend self criticism rather than actual self criticism, because they didn’t let it develop into a full-blown expose of the multi-layered ironies of:
* a programme about Free Speech hosted by a Mosque,
* censorship of the topic by the BBC,
and
* the inalienable clash of the BBC’s Islamophilia and Homophilia.

That brings me to the much awaited ‘Comedy Gold’ - the follow-up to the critically acclaimed Twenty Twelve, as previewed in the Sunday Times Culture section (£).
W1A is a spoof of the BBC. How broad-minded is that? I hear you say. How self deprecating, how liberating, how liberated, how daring, how now, brown cow. 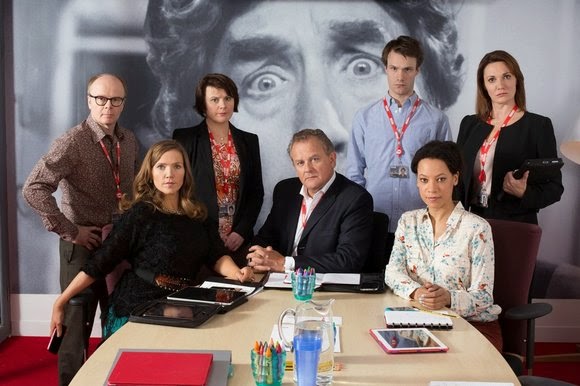 Well, the answer is it aint.
It might well be funny, and the brilliant way the actors captured the mannerisms and jargon of the people they were spoofing in Twenty Twelve augers well for this series. I’m looking forward to it.
However, it’s not going to be daring at all.   It’s going to highlight the ridiculous things such as the lack of privacy in the multi-million Broadcasting House building - that ought to be good for a laugh - don’t we all watch out for someone tripping up on the stairs during BBC 24’s see-through News or being caught unawares in the background. There are indirect reminders “that astronomical payoffs were made, and we paid for them”, but it’s not going to lampoon the things that we worry about here. “In other words, by allowing themselves to look stupid, BBC management are actually” being rather clever. “No mention of the Savile crisis”