Parody or parody of parody 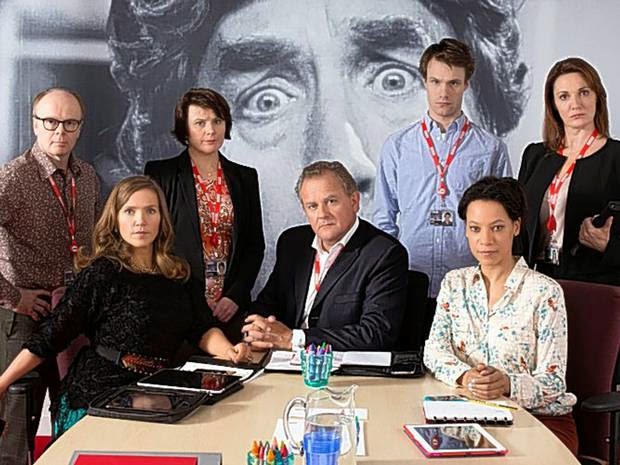 I must say I wasn’t as impressed by the much lauded W1A last night as I’d hoped to be. It wasn’t that the acting was any less sharp or the characters any less truly parodic. But there was one weakness that spoiled the whole thing and made me think of mirrors of infinity.

Let’s imagine the writers discussing their idea for the writers of the first episode of W1A, and let’s have them think up something or other for the writers of W1A to spoof. A parody of something that actually might happen, but easy to ridicule.
Let’s find an easy target and have the writers feature it in the first episode, but let’s make it unconvincing and foolish so as the more astute members of the audience suspect that what they’re watching is not actually a parody of what goes on at the BBC, but a parody of some scriptwriters trying to create a parody of the BBC, and not quite succeeding. That can be the ultimate hilarity, when the reveal comes at the very end of the series.

This week’s brilliant idea is to think of some idiotic cause, which parodies a real idiotic cause, like, say, diversity and equality, and introduce it into the first episode. But let’s make the writers too stupid to realise that they have chosen a target that misses the mark because it’s badly executed and looks more like bullying than clever parody.

It’s like a painting of a room in which there is a painting on the wall. The painting is of the room with the painting, which is of the room with the painting. That’s the idea I had from watching W1A.
Okay, you might have guessed what I’m talking about. No, you probably haven’t. Well, if you’ve ever been to Cornwall, and I’m sure the writers of all layers of my parody within a parody have - possibly to Rock or an upmarket resort that the posh people go, or maybe not, you might get the impression that the  Mebyon Kernow people are a bit weird, but they are not so dumb as to never have heard of Helen Glover from Jelbert’s ice cream shop in Newlyn or Sir Ben Ainslie who once went to Truro School.


And if they have ever been to Cornwall and met any real Cornish, they’d know that the locals don’t talk generic westcountry, but they talk in a variety of proper Cornish accents which differ from region to region, but are all unmistakably Cornish, and not joke Bristolian, Somersetish, or Devonian. So there.

By the way, I always like Jessica Hynes and the others in the cast -  particularly the ladies -  but I have to say the cameos within the programme looked decidedly forced. The visual equivalent of name dropping, which jarred. I haven’t looked at other reviews yet. But I have to say that so far it’s more affectionate, mildly self-deprecating than hard-hitting parody. But we always knew it would be, didn’t we.