Begging the Question...Is the BBC biased? 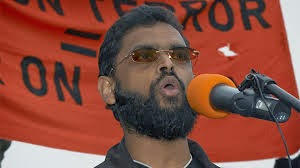 Alan at Biased BBC observes that the BBC, throughout the day, has been emphasising on all its news bulletins [in that word-for-word way the BBC goes in for when reporting such stories] that Moazzam Begg, the former Guardian/BBC-friendly Guantanamo detainee who just has been charged with 'terror offences' relating to Syria, "was never charged with any offence" before:

Why is that relevant to this?  Surely of more relevance is that the US thought he was guilty of exactly the same offences he has been charged with now. He admitted attending terrorist training camps pre-9/11…but the BBC doesn’t find that relevant here.

The BBC has been accused before of being overly sympathetic towards Moazzam Begg (and his CAGE organisation), as any readers of blogs like Biased BBC will be all too aware.

All I can add to to Alan's point is that I read the straight-down-the-line Sky News report on this story before reading the BBC News website's take.

Sky News's very simply describes the day's events and then just as simply sets them in context. It's neither pro-Mo or anti-Mo.

The BBC's piece, in contrast, is keen to report the protests against Big Mo's arrest. It then mentions midway [as Alan says] that "He was never charged with any offence", and then ends by reasserting [for added emphasis] that he's "never previously been charged with an offence" [just in case we didn't get the message first time round?]

Sky News mentions that Mo Begg was "detained [by the Americans] on suspicion of being a member of al Qaeda". BBC News, in contrast, omits that highly relevant fact [or at least it does as of 18:30 GMT on Saturday evening].

There's another difference in the way the two organisations describe CAGE that needs mentioning too.

Sky News says that it's a group "which campaigns "against the War on Terror"" while the BBC describes it, far more congenially, as a group "which helps the families of people who have been detained", which sounds more positive, much nicer.

Those are definite differences in tone and substance.

They hardly help dispel the suggestion that the BBC is behaving in a biased manner towards Moazzam Begg.
Posted by Craig at 18:42