Time again for this week's list of stories covered by Newsnight (plus details of those interviewed). What does it tell us (if anything) about BBC bias?

Tuesday 25/3
1. Interview with disgraced Co-Op boss. Interview with Paul Flowers.
2. Inheritance tax. "Is the right to pass on wealth the entitlement of everyone or the root of personal and social unhappiness?" Interview with Michelle Mone, founder of 'Ultimo' lingerie & Peter Buffett, musician and philanthropist.
3. Somalia. "Firefights on the frontline of the latest al-Qaeda battlefield".
[Closing credits: Michael Gove's rap enthusiasm. Mr Bean, the Gentleman Rhymer, performs, with mock-ups of Michael Gove in various kinds of rap gear behind] 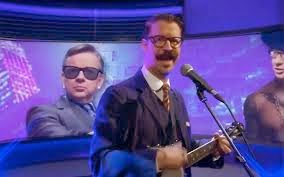 Wednesday 26/3
1. Farage v Clegg debate. Interview with George Parker of the FT, social commentator Melanie Phillips & Philip Collins of The Times.
2. NATO & Russia. Interview with Defence Secretary, Philip Hammond (Con)
3. Rwanda. "Is this man, the President of Rwanda, having his political enemies assassinated?"
4. Debt. "And what happened to the Britain that had a horror of going into debt?" (Based on a report from Demos.)
5. Teenagers & morning-after pills. Interview with Lex Croucher, video blogger & Chantal Norbi-Scott, student.
[closing credits: A 'viral' video about a fire and a trapped construction worker]

Thursday 27/3
1. Gay marriage: "Would you say, 'No, thanks' to an invitation to a gay wedding?' An exclusive BBC poll suggests 1 in 5 of us would refuse to go." Interview with Melanie McDonagh of The Spectator and author/campaigner Philip Henscher.
2. Energy companies: "15 years of privatisation and we still haven't got in right...Why start another investigation now? Could it be just another political fix and, more to the point perhaps, is it a good idea?" Interview with Dermot Nolan of Ofgem
3. Man-made acidification of the seas: "We know about global warming, but are carbon emissions turning our oceans into acid?"
4. Traumatised Afghan war veterans. The stories of two children of war veterans. Interview with Mike Griffiths, Director of Personnel Services for the British Army, 2008-11
5. Egypt. "Democracies are rarely born without pain but after just three years, post the revolution, has Egypt given up altogether?" Interview with Dr Mona Makram-Ebeid, former member of the Egyptian parliament & Abdullah al-Haddad, Muslim Brotherhood.
[Closing credits: Michael Gove's rap enthusiasm. Newsnight sets his rap, to the music of Wham]

Friday 28/3
1. Missing Malaysian airliner: "Can we be sure we're being told all this is to know?" Interview with Daniel Tan, whose brother was on Flight MH370.
2. The Front National's rise in France.
3. Tech start-ups: "Tech start-ups were trumpeted by the government as being the great engines of economic growth, but has it all stalled?" Interview with Eileen Burbidge of Passion Capital & Andrew Orlowski, editor of The Register.
4. Rap/art: "The Wu Tang Clain rap their way into the art market, pressing a priceless single copy of their new album."
[The government's ban of prisoners receiving books in jail: A clip from Porridge.]
Posted by Craig at 09:24