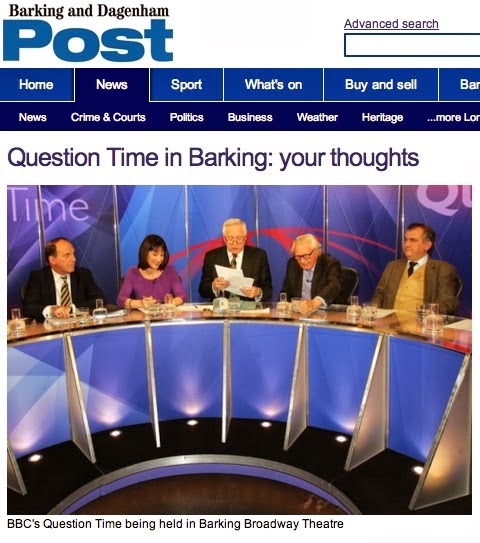 “Is it time the government listened to the people about the effect immigration is having in changing our communities?” asked Pam Dumbleton from the audience of last night’s Question Time.

“Just, in what way do you think the government isn’t listening?” enquired David Dimbleby.

“The government haven’t got a clue. David Cameron hasn’t been to Barking, and if he came they’d be warned in advance and everything would be brushed up. The government need to come and walk through our town, and just see how we now live.
Go back twelve years, it was totally different. Now, we are the complete minority here, and it’s just like the most terrible place on earth to live at the moment.” the questioner replied.

Amanda Platell said:  In this area there has been 30% drop in the, um, indigenous population, and a 200% increase in immigration.

“One in seven new business have been set up by immigrants, They’ve all been given money. Everything is set up for immigrants.I’ve applied for a hundred jobs on the railway. One hundred jobs. I don’t even get an interview these days. In the old days at least you’d get a letter. At least you’d get a rejection letter. I don’t even get that, but these immigrants, they get all their tickets paid for, they get all their jobs - I am homeless. I’ve got nowhere to live. I’ve have to go down today and see an immigrant, an immigrant telling me”... jeering.. “well that’s the truth. I went down to John Smith House today and an immigrant tells me that I can not live here. I can not get somewhere to live” said the homeless man.

“No no, you’re stating a perception of the facts. Just cos you perceive something doesn’t make it true.”

“It’s true for me. For me personally and many people like me.”

“The things that you said are exactly the same as were said about my grandparents when they came over to the Jewish east end in the early 900s. Exactly the same things. They said precisely the same things ‘we can’t walk through the streets because they’re not ‘ours’ any more. Why is the street ‘not yours’ when some of the faces in it are black?”

“Well I’ve got nowhere to live. I need to go and find somewhere to live” (indistinct jeers) “I will. Tonight”

It wasn’t just that, although his departure seems to have caused a minor internet flurry.
It was the bullying of the vociferous pro-immigration crowd and the implicit accusations of racism thrown at anyone who said anything moderately anti-immigrant that left a nasty taste.

“I work round the corner in a school that is a fantastic assimilated community and I do not recognise the Barking that we’re hearing from the front row, and I’m a bit disgusted, no, concerned, that the BBC selected that question from the lady at the front there....” said a man in the audience.

That went down well. David Dimbleby reiterated the fact that this was the most ‘popular’ question submitted today.

Only one person pointed out, to more booing,  the difference between the relatively modest influx of Jewish immigrants who were desperate to assimilate into British society and the overwhelming ‘invasion’ of immigrants from backward Islamic countries who seem to expect the British to adapt to them, which has apparently been foisted upon places like Barking.

Michael Heseltine said it was a parody of what Barking was all about. (How does he know?) Rachel Reeves sympathised with the homeless man, who had by now  gone off to find somewhere to live, and overlooked the glaringly obvious fact that this had been brought about by the Labour Government’s deliberate policy of social engineering, and Michael Heseltine did try to make that point.  “This is the most arrant hypocrisy I’ve ever listened to” he said.

David Aaronovitch is actually pleased that there’s an influx of immigrants because ‘their children will be paying our children’s pensions in a few years time’ . Hmm. If you say so.

Question Time has become a parody of itself, but it made compelling viewing for those of us who enjoy torturing ourselves with things that inflame our pent up indignation.