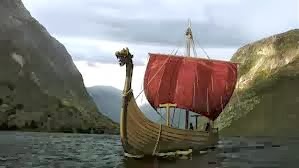 Time for a belated bouquet (especially after all these brickbats)...

This Monday's Start the Week was exceptional. Its theme was 'The Vikings and Seafaring'.

For starters, there was Historian Michael Wood (yes him) talking about the Vikings. He's always great value. Here's a sample of his contribution to the programme:

There's a sort of swaggering self-confidence to them. Arab and Persian writers refer to their tattoos, their long hair and their personal bathing habit, and their swagger. They are almost like Johnny Depp.

I remember there was an exhibition in London in 1980, the last great one, and there was a big stress on them as traders, and peaceable exchanges, origami, all that sort of stuff! Let's get back to what it's all about: This [new] exhibition's got fabulous weaponry!

You visit a Viking king. He's got Persian carpets in his hall, French wine. The wife of the king has got studded furniture and wears Byzantine silk.

You look at the poetry and it's all about bravery and leaving a great name for yourself, courage in the face of adversity, really realistic stuff, but at the same time it's about treasure - flame-licking golden decoration.

Then there was Icelandic author Yrsa Sigurdardóttir talking about her own country's Viking past (and her new book).

So why is Iceland deforested? Well, that seems to have been mostly the Vikings' doing, what with them chopping all the trees down to build their settlements and letting their sheep chomp their way through all the young saplings there. 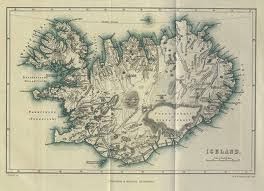 When was Iceland first settled? 1874 is the date usually given, but there seem to have been some monks there prior to then who left when the Vikings arrived. Less than a hundred years later, the island was fully populated. 10,000-20,000 people had arrived, and there was no more space. "The good parts had all been taken". Iceland was warm back then, due to climate change.

The settlers were mostly fleeing taxes imposed by the king of Norway, but their womenfolk didn't want to leave home, so the settlers stole beautiful women from Scotland and Ireland instead, which is why the DNA of Icelandic men is 90% Norwegian but the DNA of Icelander women is only 50% Norwegian, with the other 50% coming from Celtic women.

She said that Iceland has very little archaeological material - maybe the occasional bead is found from time to time - and there are no castles, but Iceland has Viking literature, the sagas, the manuscript, and she thinks that's a real contribution to the world.

She also said that the Vikings were always keen on breeding, so much so that when Iceland became Catholic in around 1000 AD, a special dispensation was made for the bishops and priests there - namely that they weren't allowed to marry, but they were allowed to have a woman. Why? "Because it was considered ridiculous that someone would want to be celibate."

Plus the only mammal on the Iceland when people came was the fox (the Icelandic fox, that is).

Then there was David Barrie, author of Sextant: A Voyage Guided by the Stars and the Men Who Mapped the World’s Oceans, talking very interestingly about navigation and describing the history of the sextant - the instrument which was at the heart of accurate navigation from the mid 18th Century (when the longitude problem was solved) through to the electronic revolution in the Second World War, with smaller vessels continuing to use it until the arrival of GPS in the 1990s.

The way the use of celestial navigation became a kind of instinctive, magical art and the fact that satellite navigation ["a little blue screen with a boat going across it"] is, inevitably, going to take away a good deal of that magic as something I've never really thought of before. Modern sailing has obviously been revolutionised by GPS just as much as 18th Century sailing was revolutionised by the sextant, and older captains lament the passing of that old knowledge in a time when sailors stare at screens to navigate, not at the the sea, stars and moon.

The fourth guest was Rose George, author of Deep Sea and Foreign Going, and she was particularly interesting.

She calls shipping an 'invisible industry' because people are completely unfamiliar with the names of the huge companies involved in it. (I certainly never heard of any of them). Plus it's a business-to-business industry/ She cited surveys that ask people how much of the stuff they've got around them comes to them by sea. Most people say they've no idea but guess somewhere around 30-40%. It's in fact 90% - and in the UK 95%.  So we're as reliant on the sea and shipping as ever before, even though neither impinge on our consciousness anywhere near as much as they used to do when were actually felt ourselves to be a maritime nation.

As for the size of these modern ships, some are now four football fields long and if they unloaded the containers (some containing up to 18,000 containers, with one or two boxes along filling a truck) of just one such ship it would create a line of traffic 60 miles long on a motorway.

That's why shipping is so efficient.

Why isn't this industry in our consciousness anymore? According to Rose, that's because we don't meet the people who work in it anymore (the number of British seafarers has fallen from 150,000 to 20,000) and there aren't any 'British ships' anymore...

...which is largely down to 'flagging out'. 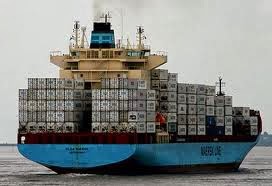 'Flagging out' is where you pay a fee to pick the 'flag of convenience' you want to sail under. (Mongolia has a fleet, inland Bolivia too, plus tiny Liberia has the second-biggest fleet in the world.)

Of course, it's only on paper that we don't have any ships. We've plenty of flagged-out ships.

What's the point of flagging-out? Because it helps get round taxes and labour laws or regulations. "It's one of the freeest markets there is," she said.

Rose also talked with admirable clarity about piracy in the Indian ocean, and why it's so difficult to stamp it out using national navies. The main reason is simple: the Indian ocean is vast. Pirates can raid your ship in 15 minutes, and by the time the nearest naval vessel reaches you it can be hours or days later. She quoted an EU naval force guy saying, "It's like having two police cars patrolling Western Europe", before adding herself, "I don't people understand the immensity of the ocean because people now just fly over them."

Reassuringly, she said that piracy is now contained, and that this might be because many vessels have started using armed guards. "Pirates are not stupid. If they are fired at, they will retreat", she said.

She also noted that hostage-taking is a huge problems (550 seafarers held hostage in 2010), yet it's a story the media (with very rare exceptions) ignores.

Pirates she says are nothing more than "criminal thugs". There's nothing romantic or Johnny Depp-like about them whatsoever.

As you can tell, I found that very interesting.
Posted by Craig at 16:58