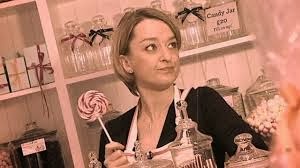 Most of last night's Newsnight was given over to events in Ukraine [see previous post.]

(That's understandable, though why they completely failed to report the snake-eats-crocodile story which has gripped the entire world remains an unfathomable decision!)

What else did they cover though? Well, three other stories.

First came an interview between Laura Kuenssberg and Michael Gove.

Now, I'm biased about Michael Gove. I like him, and I like what he's seeking to do. [Yes, yet another of my opinions! That's two in one day. If I continue like this I'll have to start up a side-blog called A Convoluted Gossamer Construction.]

And, yes, I enjoyed this interview too.

But it was certainly an odd one.

On my (very) old blog, which was even meaner about the BBC than this one, I gave over an entire post to praising Laura Kuenssberg's presentation of an episode of Radio 4's Westminster Hour. (Such posts were rare).

I called her a breath of fresh air (in contrast to Carolyn Quinn and Norman Smith).

But part of Laura's success back then was than she was new to that kind of interviewing and, oddly, five years later, even after her stint at ITV, Laura's interviewing style still remains strangely 'unformed' - 'stilted' and 'stagy', you might say - and un-BBC-like.

But it works. And I still wish others BBC interviews would learn from it.

That old post of mine included some 'rules for impartial interviewing', which I'd completely forgotten about.

Only interrupt an interviewee if they are taking an excessive amount of time to answer the question, or if they are not answering the question you put to them (though give them enough time before jumping to that conclusion).

Remember that the interview is not about you. It's about the issue/story of the moment, and the views of your interviewees. Maintain a firm but low-key hand on the tiller of the interview. Allow it to flow. Never be a prima dona.

Ah, but...I can hear Sue reminding me about Laura's interruption-strewn, Paxmanesque interview with Hattie Harman last week. Nothing 'low-key' about her interviewing style there?

OK. Even though she's not said anything to me about this yet, I'm going to concede that point to Sue in advance of her even making it (or possibly even thinking it!)

Shuffling my papers and moving on...

Newsnight has been unhealthily obsessing about the Channel 4 hit show ever since it began, so it was hardly surprising (if a bit depressing) to see then still refusing to let go of this bone of theirs, even after all this time.

The interview itself was even more depressing, and the problem didn't lie with Deirdre.

It lay with Emily Maitlis, who used the first half of the interview to conduct a show-trial-in-absentia of Channel 4.

Her line of question led...yes led...Deirdre into condemning the makers of Benefits Street in every way possible.

It was so blatant. Emily's agenda here couldn't have been more blatant: To re-make the prosecution case against Channel 4 and get White Dee to damn them out of her own mouth.

OK, Mr Katz, we've got the message. You don't approve of Benefits Street. [And why should you? It got MILLIONS more viewers than you could ever dream of getting after all, and that's gotta hurt!].

Given that the BBC had been accused of waiting six days to report the Mail's allegations about Hattie, Jack and Tess (of the Labour Party) and refusing to even show the Mail's front pages for days (which is true), some have protested that this was a clear case of BBC bias, with the corporation leaping at the story of a Tory advisor being linked to paedophilia (still very much allegedly), "like a rat up a drainpipe".

I saw that accusation of BBC bias at Biased BBC, and could see the point being made...

...until I thought about it for a few seconds.

The arrest of a Downing Street advisor, particularly of these kinds of allegation, is big news. Unquestionably, It's an arrest by the police, not merely a newspaper's allegations. Newsnight was obviously right to report it and credit, though they did it briefly and cautiously (which is also right).

Plus I was a bit peeved at the B-BBC commenter's claims that "gone was the lack of curiosity that [Newsnight] ably displayed about Harman & co a week ago".

Given Newsnight's extensive coverage of the story last week - including Laura K's grilling of Harriet Harman and Laura's subsequent investigation into the NCCL's archives - this is grossly unfair.

Still, taking this post and the last into consideration, I'm going to give Laura Kuenssberg credit for being a breath of fresh air, and Emily Maitlis the Ignobel Prize for being stuck in a biased BBC rut, seemingly following 'the hive mind' without a thought of her own.
Posted by Craig at 20:20