The EU's funding of the BBC 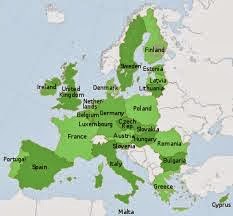 Do you remember the "brief frisson of excitement" a week or so ago about an article in the Spectator that I myself, sharing in that frisson, described as looking like "a questions-really-need-answering kind of scoop to me, and quite damning against the BBC"?

The Speccie had used FoI requests to force a reluctant BBC to reveal that it had received some £4 million in EU funding between 2011 and 2013.

So what happened next?

Well, nothing really. The "brief frisson of excitement" subsided, and the BBC's world continues to spin on regardless.

Aha!...but, via Christopher Booker at the Sunday Telegraph, Richard North of EU Referendum is on their case and his piece presents compelling evidence that the BBC is keeping schtum about a lot more EU funding than the Spectator's FoI requests forced them to admit to.

Although Richard North doesn't provide links, nosy bloggers like me can attempt to replicate his findings (I found a few of them, and then gave up) and, yes, they do take you to various EU documents on the EU's transparency website which tell you that the BBC received such-and-such an amount for such-and-such a project. (Try it for yourselves!)

What is particularly interesting here, though, is that the EU reports paying the BBC £4,345,354.79 (€5,269,083) in 2012 alone, which is considerably more than the £3 million which the BBC claims it received in the 32 months which included the whole of 2012. There seems to be something of a mismatch, which needs explaining.

Some of things the EU paid the BBC to help them with (many sounding very worthy) include: -

- support for the Palestinian media sector
- training assistance to Georgia's public service broadcaster
- "shaping the future of the Turkmen media in the post-Niyazov thaw”
- the "promotion of human rights, gender equity and peace" in Somalia

Figures for 2013 have yet to be posted but, on the current average, the BBC World Service Trust is making slightly over £3 million a year from the EU - well over the £3 million in 32 months that the Spectator is asked top believe. That is enough to make sure that the parent institution isn't too critical of its benefactors.

Furthermore, this isn't the first time the BBC has understated the amount it gets from the EU claiming in early 2012 that it had received £3 million in the previous four years when the actual sum was in excess of £16 million.

The state broadcaster's reticence to disclose the real amounts it is getting from our supreme government thus tells a worrying story. And if it is concealing the truth about its income from the EU, what else is it hiding?

Still, if the BBC ignored The Spectator, they are certainly bound to ignore Christopher Booker (out of habit) and Richard North (cos he's nowt but a blogger).

The chairman of the BBC Trust has been forced into a humiliating climbdown over his repeated refusal to appear before a committee of MPs.

Lord Patten has spent months trying to avoid a grilling by members of the Commons European Scrutiny Committee over claims of bias in the BBC’s coverage of the EU.

But yesterday, Bill Cash, chairman of the committee that reviews UK-EU relations, announced that Lord Patten had given in.