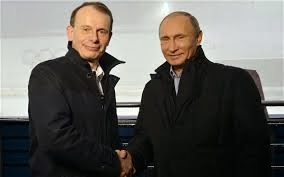 If you are able to read it beyond the Daily Telegraph' paywall, please take a read of David Blair's brilliant description of how President Putin rang rings around our very own, dear Andrew Marr. Alas, poor Andy, and his predictable BBC questions.

If Julius Caesar had ever granted an interview, the spectacle might have been similar to Vladimir Putin’s audience with Andrew Marr and sundry other journalists in Sochi. Regal, relaxed and chuckling, Mr Putin clearly regarded the whole session as a bit of a joke. He treated his interlocutors with genial contempt – and they were so grateful to be in his presence that they appeared not to notice.

Mr Marr’s “interview” with Mr Putin turned out to be four questions posed alongside various other journalists and then a few minutes one-on-one. Poor Mr Marr behaved like an overawed prefect interviewing his headmaster for the school magazine - and failing to spot how he was being mocked and played with.

Almost every one of Mr Marr’s questions brought forth a sigh and a chuckle from Mr Putin. The Tsar knew exactly what these Western journalists were going to ask him and he was determined not to take them remotely seriously.

No-one could have been less surprised than Mr Putin when half of Mr Marr’s questions were about gay rights. The president duly favoured us with his view that he didn’t know “whether homosexuals are born or made” and that Elton John was a “distinguished musician”.

Mr Putin also knew that one Westerner was bound to utter the phrase “Russian bear”. With dreadful inevitability, it was Mr Marr who wheeled out the ultimate cliché, asking Mr Putin whether his amnesties for the Greenpeace prisoners and Mikhail Khodorkovsky were just the “Russian bear putting on a smile”.

That put a big smile on Mr Putin’s face.