You Spin Me Round...Like a Record, Baby 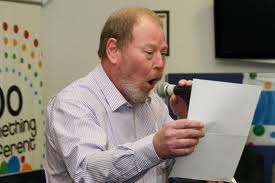 There's a dramatic-looking instance of BBC bias being reported today.

The Telegraph tells us that "David Cameron has accused the BBC of misleading listeners in Liverpool about the scale of the cuts to their city" and cites some shocking bias from a BBC presenter:

In testy exchanges on BBC Radio Merseyside, Mr Cameron was accused of “unfairly” hitting the city with steeper cuts than those faced by the council in his prosperous constituency of Witney.

Roger Phillips, the host, told Mr Cameron he was “so out of touch it’s untrue”, adding he should spend a week in the area and visit a food bank.

The Prime Minister responded: “One of the reasons people feel treated unfairly is because they hear on programmes like yours, day after day, week after week, sets of figures that aren’t accurate or right.

That seems like shocking, bang-to-rights proof of BBC to me - a BBC presenter accusing the PM of treating Liverpool "unfairly" and telling him to his face that he's "so out of touch it's untrue". Surely the expression of those kind of personal opinions run completely contrary to the BBC's editorial guidelines on impartiality. Roger Phillips should either be disciplined or sacked.

That's what I rushed to my keyboard to write.

Unfortunately, being a cautious, overly conscientious type, I thought I'd better actually listen to the Radio Merseyside interview first, so as to transcribe more of the damning stuff if necessary. The result rather took the wind right out of my sails.

Yes, it was a tough interview and quite "testy" (though I've heard much testier from the likes of James Naughtie) and it pushed several left-wing lines of argument against the Prime Minister. However, that's just the kind of interview the BBC can always justify as being robust 'Devil's Advocate' interviewing.

At no point in the interview did Roger Phillips accuse David Cameron of treating Liverpool "unfairly".

This is what he actually said (in his introduction):

David Cameron has denied that our councils are being unfairly treated when it comes to government funding.

Similarly Roger Phillips did not tell the PM that he's “so out of touch it’s untrue”, as the Telegraph reporter alleges.

This is what he actually said:

We get call after call after call from people saying you and your Cabinet are just so out of touch it’s untrue, you need to come up here and spend a week up here, work in a foodbank, find out what’s really, really going on at grassroots level and then you will understand why we feel - perhaps - we are being treated unfairly.

In both cases, Roger Phillips can claim that he was only quoting other people - his callers - and that it wasn't an expression of his own personal opinions. He can say that it wasn't him claiming that Mr Cameron is "so out of touch it's untrue", or suggesting that the PM should spend a week in the area or work in a foodbank. It was his audience. He's merely playing devil's advocate.

That's what he can say, and there's no way to disprove it.

So, the Telegraph seems to have been engaging in a little BBC-style spinning of its own here.

That's what I rushed to my keyboard to write next.

Unfortunately, still being a cautious, overly conscientious type, I thought I'd better listen on a bit more. The result rather took the wind right out of my sails again.

In the subsequent (longish) review of the Cameron interview between Roger and his two guests, both guests panned David Cameron and piled on the anti-Tory, anti-austerity rhetoric.

So there was no balance in the guest selection there.

Yes, he did give a few more 'devil's advocate' points (what 'David Cameron would say') but his real views seemed to me to ring out loud and clear. You could tell that he meant them, unlike those 'devil's advocate' points. He also contradicted several of the arguments Mr Cameron had made in a way that sounded rather less than impartial to me, especially as it reinforced the assault being made on the government by his two guests.

And his guests - like David Cameron himself - assumed that the points he'd put to the Prime Minister during the course of the interview were his points. One of them praised him for doing so. So the Telegraph reporter may merely have been confused, like them, rather than deliberately spinning.

Please take a listen to the first twenty minutes of Roger Phillips's programme and form your own judgements. Mine performed a couple of three-point turns during the course of it - as you've just seen!
Posted by Craig at 21:56