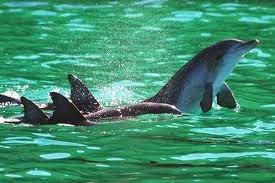 Clive James is stilling writing beautiful TV reviews at the Daily Telegraph. Here's an extract from his latest piece:

Having painstakingly disguised an underwater camera as a tuna, BBC One was rewarded with an entrée into a so-called “megapod” of dolphins. We were assured that this was the first time ever that a megapod had been seen. And indeed Dolphins: Spy in the Pod featured some stunning footage, if stunning footage is what you go for. Personally, after the first thousand or so dolphins had surrounded the dummy tuna, I started to get a bit blasé. When so many dolphins meet up at once, their main object, apparently, is that they should all have it off with one another.

Good luck to them, but they were unlucky in the commentary, which was written by someone with an ear of tin. There were references to “the legendary megapod”. But how could it be legendary, if it has never previously been seen? Perhaps it was seen by ancient sailors, who said: “What we need is an underwater camera disguised as a tuna.”

For a more lowly kind of humour, how about this?: How does a group of dolphins make a decision? Flipper coin!
Posted by Craig at 20:05