As predicted, when the Bethlehem Unwrapped item was featured on Ed Stourton’s Sunday, Radio 4, time ran out just as things were (might have been) hotting up. Having been trailed throughout, the discussion was nipped in the bud before anything significant or new had a chance to get its boots on.

This sort of thing happens so frequently it’s beginning to look like a conspiracy by some mischievous BBC producers ‘aving a larf. 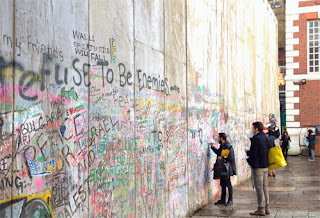 Lucy Winkett reiterated the same claims she has stated many times in the BU publicity and subsequently in the Guardian, with knobs on.  Alan Johnson, putting the case for Israel, hardly got beyond reciting the figures relating to suicide bombings. He did manage to  mention the recently foiled bus-bombing including the pertinent fact that the plot was hatched by terrorists from Bethlehem.You know, the ordinary people of Bethleham who find themselves in the grievous situation which must be acknowledged. Or should I say ‘unwrapped’.

It almost seems that by pitching those two contributors against one another (one defending Israel, and the other allegedly ‘not taking sides’,) the BBC at least, was putting the Rev in the very partisan position (taking sides) which she so unconvincingly denies she’s in.

Otherwise what was the point of even trying to set out Israel’s justification for the separation wall ?  In other words if Alan Johnson or anyone else actually believed the Bethlehem Unwrapped project was merely intended to be an even-handed anti-wall protest and not a straightforward anti-Israel one, they would have argued differently. For example, to explain why it was misguided rather than even-handed he could have cited the nature of the graffiti, the nature of the speakers and the nature of the project’s collaborators and beneficiaries; factors which amount to an overwhelming body of evidence that the project was indeed another Israel-bashing pantomime in a paper-thin disguise.

The snippet on Sunday wasn’t worth bothering with at all, since anyone who was interested will have gone far beyond the superficial ‘Lucy Winkett denying the bias versus a Zionist justifying the wall”.

If they were going to have a debate, why not have a real one? Why not allow time to discuss the whole issue and its ramifications, lock, stock and barrel?
Why not bring up the issue of the persecution of Christians in the Middle East, which was the topic of an item aired earlier in this very episode of Sunday, or better still amalgamate the two items. Alan Johnson has written articles about this matter, yet he didn’t have time to bring it up at all.
What about the project’s dodgy association with Interpal and War on Want, which have also been extensively written about online.
Why didn’t we get to hear the testimony of the pro-Israel demonstrators who were tuned away or harassed by monitors when they wished to write their messages?