Look what the khat dragged in! 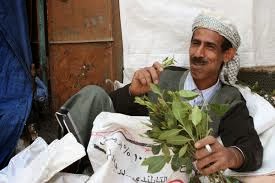 As someone who (for my sins) has been deeply immersed in the world of blogs about BBC bias for many years now, I think I can safely say that there's a perception about that the BBC advances a liberal position on drugs - from the many, many, many blogposts of Home Editor Mark Easton which report (uncritically) the statements of some pro-liberalisation group or bigwig through to Andrew Hussey's Heroin on Radio 4.

Wednesday night's Newsnight tackled a drugs story. At issue was the UK government's decision to ban khat - a drug popular with Somali immigrants.

I suppose you might have expected Newsnight to ask, "Is that a good idea or a bad idea?", but they chose not to. Instead, they asked Alex Miller of VICE to do a report for them.

Alex's report was a sustained argument against the UK government's intended ban.

I could tell where his report was going from its opening words:

Khat is a mild stimulant that grows on trees in East Africa. To most drinkers and drug-takers in the UK the effects of khat are so minor that they barely register.

What followed used a distancing tone of voice, including sarcasm, to dismiss the complaints of khat's critics in a few brief sentences.

Here's one such sentence - its first part delivered in a normal tone of voice, its second (a straw man caricature) rushed like the punchline of a joke:

But people who grew khat insist it should be thought of more like coffee and less like the end of the world.

Khat dealer Mahamud Ahmed Mohammed was told (by Alex) that the ban would "presumably be bad for your business." MAM (if I may call him that) agreed.

But, as we may not feel too much sympathy for him, Alex then presented us with a string of poor Kenyans whose lives would be ruined by the British government's ban. Whole regions of Kenya are economically reliant on it, he told us. "When the UK ban actually kicks in, the region's gonna go from being one of the richest in Kenya to being broke". Alex kept on reinforcing this message, tugging at our heart-strings.

The locals Alex talked to dismissed the suggestion from Western government that money from khat helps funds the terrorists of al-Shabab (the murderous bastards behind the Westgate shopping centre massacre in Nairobi). Alex gave every impression that he completely believed the locals rather than the Western governments, and kept getting them to re-assert that 'fact'. He referred to the link between terrorism and the khat trade as a "supposed" one, emphasizing that word strongly, and then dismissed it editorially, before proceeding to advance the argument that the ban would actually force more Kenyans into the arms of al-Shabab. The argument?: No money from khat will translate into support for vicious Islamic terrorism. The insane illogic behind this was not explored, for whatever reason.

Alex's next argument was that the ban will lead to illegal trading, to smugglers becoming rich, and that such smuggling is easy.

We then heard from some British Somalis (or should that be 'British Somalis'?) attacking the government for intruding on their personal freedoms and making khat sound worse than it was.

He "claims" to have struggled with khat addiction, said Alex, and "preaches" on a weekly TV show about it - plenty of loaded language there to dispose us against him. Alex disagreed with him and he disagreed with Alex. It was all over in a flash.

Then it was straight back to Kenya and its khat cafes.

More loaded language followed immediately, as Alex said khat's detractors were "fixated" by them. The locals in the cafe think they're great, and Alex described them as being great too - places where people just hang out and have fun. "It's just friendly and chilled out. It's a good vibe, right?", he said.

Now, the BBC will probably defend this one-sided polemic by saying that it's one isolated report, a 'personal view' (even though they didn't exactly emphasize that fact), and that it will be balanced out over time.

Except that - and I will state this with confidence - it won't be balanced out over time. There...will...be...no...counterbalancing...anti-khat, pro-ban...polemic...on...Newsnight,...not now, not ever.

It's that BBC bias thing again, isn't it?

For a slightly more balanced report, why not try that by Channel 4 News? Unlike Alex's BBC piece, where he asserts that the vast majority of Somali Brits (or 'Somali Brits') oppose the UK government's ban, Channel 4 says [with my emphases - obviously):

By making such decisions, Theresa May defied government scientists and some of her fellow MPs. But she became an unlikely hero of the Somali community.

Khat is used by an estimated 90,000 people in the UK, mainly Somalis. A mild stimulant, it's blamed by many for family breakdown, unemployment and mental illness.