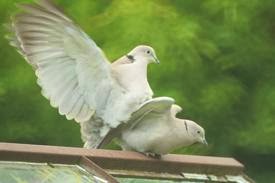 Every day I put out a little food for the birds, and my most regular customers these days are a couple of collared doves. Ever since I can remember, I've woken to their (and their ancestors') monotonous yet strangely soothing calls (especially on Sunday mornings).

I was very surprised when I reached adulthood to be told that these ubiquitous birds only came to our country in 1955. They seemed to me to be as inseparable from an English Sunday morning as church bells, lie-ins and the Sunday papers.

But, no, they are recent immigrants, the front of a wave (an "explosive colonisation", David Attenborough called it) which began moving northwards and westwards in the 1930s out of their traditional European nesting ground in the Balkans, covering 2.5 million sq kilometres in just 40 years.

The interesting thing is that no one knows quite what triggered this mass expansion in their range.

There's speculation that it was a genetic mutation, spurred on by the dove's ability to breed quickly and throughout the year. ("Some will be sitting on nests wherever you here this Tweet of the Day", said David Attenborough.)

'How was this story reported by the BBC back then?', you might wonder.

Well, careful historical research by Is the BBC biased?'s scholarly archivists can reveal that the BBC, in the years leading up to 1955, played down the likelihood of the mass influx of collared doves to the UK, dismissing the accurate predictions of Sir Andrew Greenfinch of Bird Migration Watch.

In around 1970, the BBC's then-political editor, Nick Robin, one-time chairman of the Young Ornithologists, admitted they'd got it wrong in the late '40s and early '50s but insisted the corporation was now getting it right.

Belying that though, there's a report in the BBC's Archive from 1971 by their newly-appointed home affairs correspondent, Dominic Capercaillie, suggesting that the Daily Quail was 'scaremongering' about grey squirrels and a tweet (literally) from chief correspondent Hugh Sykes'-Warbler agreeing, saying "it's dangerous talk, isn't it? It may give permission for prejudice."
Posted by Craig at 11:18