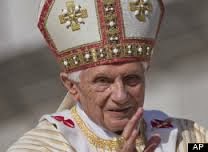 During the reign of Pope Benedict XVI, sections of the BBC personally hostile to Benedict - especially Ed Stourton's Sunday and the BBC's Rome correspondent David Willey - would feature regular criticism of Benedict's Vatican for doing too little about priestly child abuse in the Catholic Church.

Here's one 2010 example from David Willey:

Pope Benedict has plenty of opportunity during his brief weekend visit to Malta to talk about the clerical sexual abuse which has scandalised members of his faith around the world, and created a credibility crisis for the world's largest Church, the Church of Rome.

But he has chosen to speak in generalities and metaphor rather than to address the problem directly.

Given that Sunday has been rigorous in its coverage of child abuse with regards to the Catholic Church, covering its every twist and turn, it will be interesting to see how (or if) it covers this story:

The former Pope, Benedict XVI, defrocked nearly 400 priests over a two-year period for allegedly raping and molesting children, according to a leaked Vatican document.

That's from Sky News today, and the Sky report goes on to say:

Before becoming pope, then-Cardinal Joseph Ratzinger took action after determining that bishops around the world were not following church policy and putting accused clerics on trial in church tribunals.

This is not the picture of Benedict painted over time by Messrs Stourton and Willey, so how will they report this story?

Probably grudgingly, and perhaps in the manner of BBC News's online take on the same story which briskly mentions that "Close to 400 priests were defrocked in only two years by the former Pope Benedict XVI over claims of child abuse, the Vatican has confirmed", merely adding:

Benedict, who was elected in 2005, took the helm as the scandal of child sex abuse by priests was breaking.