More or Less, or a lot less 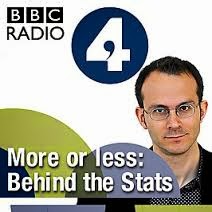 You may (or may not) recall that biased Radio 4 immigration debate from the start of this year, Immigration: Good for Whom?

Well, Radio 4's excellent More or Less [h/t hefyd in the comments] returned to it this week after a listener queried the stats used by two of the contributors - the confident assertion by mass immigration advocate Susie Symes that immigrants contribute £70 billion a year to this country, and the confident but contradictory assertion by the more sceptical David Goodhart that their fiscal contribution was actually either neutral, or slightly negative. The listener said, correctly, that both couldn't be right.

She began by dismissing Susie Symes's £70 billion claim. Susie had got it wrong by a factor of ten. The correct figure, an extrapolation from an OECD study, should have been £7 billion. Moreover, she'd misunderstood what the report was studying. It was not looking at what immigrants contribute to the economy as a whole. They were looking at the narrower question of whether immigrants contribute more to the public purse than they take out and calculated it by comparing how much they pay in tax and social security contributions to how much they receive by way of benefits and services. They looked at the period from 2007-09 and found, yes, they contributed roughly £7 billion, just under half a percent of GDP. Susie Symes argued this was "a large contribution" but, Ruth said, it's "actually quite a small amount".

But what about native Brits? Do we take out more from the public purse than immigrants? Or less?

We all know the government is in debt and is running a large deficit. That is it's spending more than it's got and it's spending a large proportion of that money it doesn't have on its own people. And we can see that very clearly when we look at how much native Brits are putting in and taking out of the public purse - on average, each native Briton took out roughly £11,000 more than they put in between 1995 and 2011. So, on average, only the Europeans are putting more in to the UK public purse than they're taking out.

So, the stats stack up as:

Interesting, eh? Now what should we do about non-European immigration?

There'll be a second part to this report on next week's programme, and there's a balanced write-up of the whole thing here.